Today, the South West Popular Committee along with international activists embarked on a new effort to establish a village, Canaan, on Palestinian land in South Hebron Hills. The village’s name was not accidental. We wanted to declare that we are the indigenous people of Palestine. We are the descendants of the Canaanites and our ties to the land can never be broken or taken away. Early last night, various Palestinian activists from a wide array of villages in the South West Bank area along with international activists met in a home to discuss plans for the coming day. 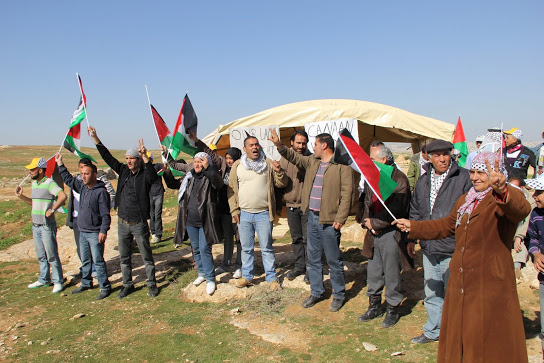 Signs were prepared which stated ‘Our Land is Our Right’, ‘Canaan Village’ and a declaration of intent which stated that “we are the sons and daughters of the Cananites, we establish Canaan Village on endangered Palestinian land.” “We declare that it is our natural right to develop, reclaim, improve, use and live on all our lands free and without threat from occupiers/colonizers.”

In the early morning hours, following a night of planning, we established Canaan as our first attempt, in the south of Yatta (the entrance to Twani). Within less than a minute, while we barely managed to establish the tent, an occupation jeep arrived. The occupation soldiers encircled us and told us we must leave. We refused to obey such a racist demand. An officer of the occupation army then went on to demolish our tent, steal our additional tents and equipment and violently prevent us from reclaiming our land and our belongings.

Several hours later, we went on with a much larger group of activists, international supporters and an especially large number of journalists, to the east Yatta, near Ein Mai’in, Hazawai, we established a large tent and began building a room from stones of the land. Within half an hour, we were heavily encircled by at least 6 jeeps of the occupation forces. A large military vehicle which fires skunk water was brought in. We were told that we have 10 minuets to leave the area and that the land was a ‘closed military zone’. We did not yield of course and were immediately showered upon by heavy skunk water. 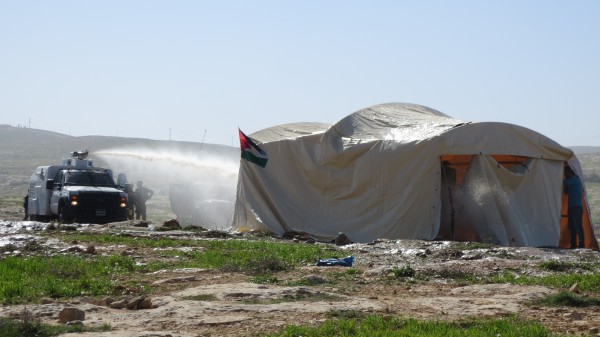 Occupation soldiers then went on to attack journalists and arrest them. They beat an elderly woman and other activists. In several instances, activists jumped in and prevented with their bodies the arrest of two people. After several hours of struggling with the occupation soldiers which numbered more than 50, 4 journalists, 8 Palestinians and 2 international activists were arrested, our tent was destroyed and we were prevented from returning to our land. For many hours during the hot afternoon, hundreds of activists remained in the area and demanded the right to return to the Canaan Village. 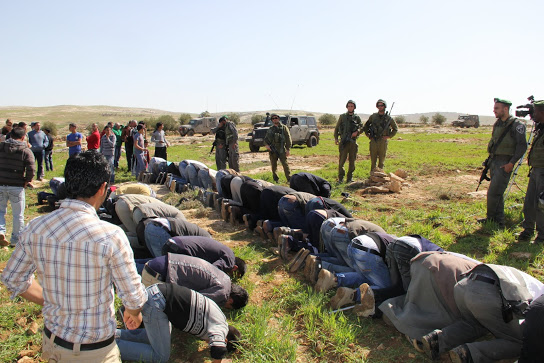 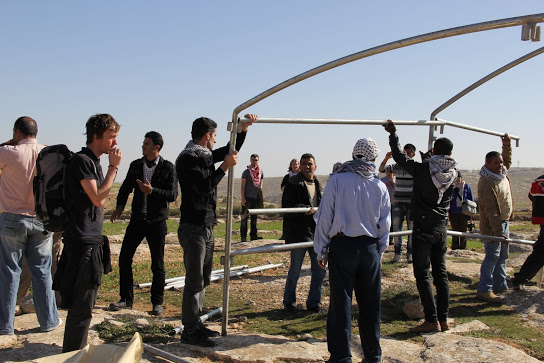 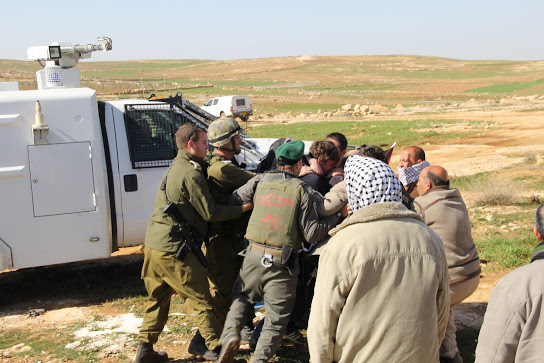 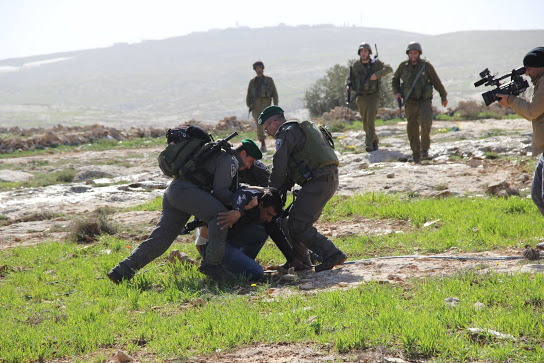