Update on 24 Jan: Army demolished an emergency tent and two animal barracks this morning in Al Maleh saying that any new [even emergency] structures will be demolished again. Breaking: 10 am – reports of bulldozers on the way to Jiftlik (Jordan Valley). This Friday expected demolitions in Fasay’il al Wusta (Jordan Valley). 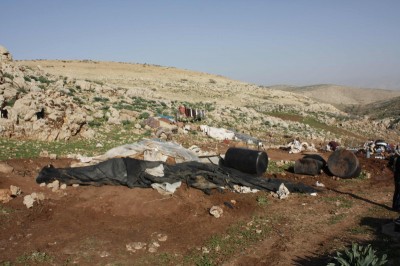 On 17th January the Israeli military destroyed 55 homes and animal shelters in Al Maleh, northern Jordan Valley. As of 19th January the entire village has been declared a Closed Military Zone and the road to the village has been closed. The army have confiscated the possessions of those made homeless and 18 red cross tents, which were donated after the demolitions. The residents are now sleeping out in the fields with no shelter. When international activists and journalists tried to access the area via the Tayasir and Al Hamra checkpoints and Mehola junction off road 90 they were refused entry.

Brihgton Jordan Valley Solidarity (JVS) is concerned that this is a tactic to make the residents of Al Maleh leave the area, and one which could spread to other areas in the Jordan Valley.

The demolitions are part of a long campaign against residents of Area C in the Jordan Valley. Palestinian residents of Area C, designated as under control of the Israeli administration during the Oslo Accords, are banned from building permanent structures or infrastructure and even prohibited from renovating their homes.

Brighton Jordan Valley Solidarity is also calling on international community to take action in line with the Palestinian call for boycott, divestment and sanctions (see http://www.bdsmovement.net/) against Volvo, which provided the buses which transported the army to the demolitions and JCB which manufactured the bulldozers used in the demolitions (http://corporateoccupation.org/jcb-and-volvo-machines-used-in-demolitions-in-al-maleh-and-al-mayta-17113/).

At around nine in the morning on January 17th, a demolition order imposed on the village of Hamamat Al-Maleh, which includes the community of Al-Mayta, was carried out by the Israeli army and police. The demolition crew also included an unidentifiable group of balaclava-clad workers. Residents were given forty days notice of the demolition order. In Hamamat Al-Maleh, twenty-five houses were destroyed, including eighteen in al-Mayta, displacing seventeen families. Another 33 structures used for keeping livestock, and therefore the livelihood of these communities, were demolished. 130 people live in al-Mayta, with around 37 families in demolished areas of Al-Maleh.