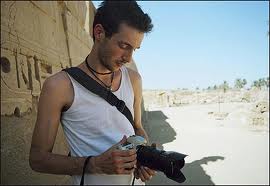 Tom was 21 years old when he was shot. A photography student, he had left the UK to volunteer as a ‘human shield’ in Iraq. Here he heard about the ISM, one of whose volunteers, Rachel Corrie, had just been killed by a bulldozer whilst protesting house demolitions in Rafah. He headed there himself, arriving on the 6th April.

On the day of his shooting, Tom was with other ISM activists walking through Rafah when Israeli sniper fire started. Almost everyone ran for safety, but Tom noticed that three children, aged between four and seven, had remained motionless, paralysed with fear. Tom went back for them. He got the little boy to safety, and then went back for the two girls. He was wearing a fluorescent vest, and was clearly unarmed. An Israeli sniper shot him in the head. (Read more.)