Tom was 21 years old when he was shot. A photography student, he had left the UK to volunteer as a ‘human shield’ in Iraq. Here he heard about the ISM, one of whose volunteers, Rachel Corrie, had just been killed by a bulldozer whilst protesting house demolitions in Rafah. He headed there himself, arriving on the 6th April.

On the day of his shooting, Tom was with other ISM activists walking through Rafah when Israeli sniper fire started. Almost everyone ran for safety, but Tom noticed that three children, aged between four and seven, had remained motionless, paralysed with fear. Tom went back for them. He got the little boy to safety, and then went back for the two girls. He was wearing a fluorescent vest, and was clearly unarmed. An Israeli sniper shot him in the head. 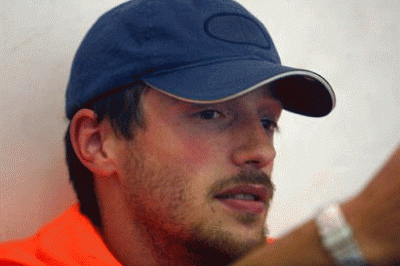 There was a two hour delay at the border of the Gaza Strip before an ambulance was able to take him to a hospital in Be’er Sheva. In a coma, he was transferred to a hospital in the UK, where he died the following year.

The soldier who shot him, Taysir Hayb, was convicted of manslaughter and sentenced to eleven and a half years in prison. A British inquest into the killing found that the killing was intentional – in other words, murder.

Tom’s shooting followed the murder of Rachel Corrie, run over by a bulldozer on the 16th March, and the near fatal shooting of Brian Avery, shot in the face in Jenin on April 5th. Later that month, another Brit, filmmaker James Miller, was also killed by a sniper in Rafah. The Israeli military have refused to accept any responsibility for what they did to Rachel, Brian or James.

Hurndall was trying to save Palestinian homes and infrastructure but frequently came under Israeli fire and seemed to have lost his fear of death. “While approaching the area, they (the Israelis) continually fired one- to two-second bursts from what I could see was a Bradley fighting vehicle… It was strange that as we approached and the guns were firing, it sent shivers down my spine, but nothing more than that. We walked down the middle of the street, wearing bright orange, and one of us shouted through a loudspeaker, ‘We are International volunteers. Don’t shoot!’ That was followed by another volley of fire, though I can’t be sure where from…” – Robert Fisk, The Independent, 2009

Tom Hurndall was a young man with a dream…he paid for it with his life. –The Telegraph, 2004

Tom, blind to nationalities and borders, exuded humanity. He wanted, he wrote in his journal, “to make a difference”. He did. He also had an outrageous sense of humour and will be missed, most of all, because he made those of us who were his friends smile. He is survived by his parents, sister Sophie, and his brothers Billy and Freddy. – Carl Arindell, The Guardian,  2004.

Today International Solidarity Movement pays tribute to Tom Hurndall for his bravery and sacrifices. He is never far from our thoughts, and he continues to inspire our Palestinian, Israeli, and International volunteers throughout our campaigns in the Occupied Territories. Tom would want us to remember him. But we also know he’d want us to remember that thousands of innocent Palestinians have died under similar circumstances. These people’s deaths have not been investigated, and have often been lied about, claiming the victims to be combatants or explained away with empty phrases like “caught in the crossfire” or “tragic accident.”

While the ISM acknowledges that the Israeli military court found Wahid Taysir guilty of manslaughter, an injustice was committed by his early release from prison in September 2010 due to “good behavior.”

The international community will continue to question the policy and decision makers responsible for Tom’s murder and the murder of thousands of other innocent people.