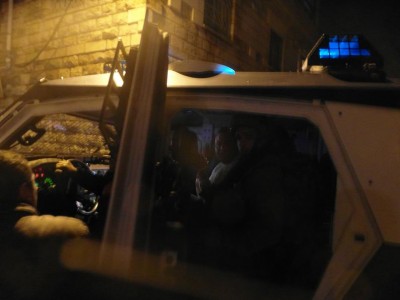 A Palestinian man was arrested in Tel Rumeida, Hebron. Soldiers invaded homes without permission, indiscriminately beating men and children and forcing the residents out onto the streets.

At around 22:30 pm on Monday 7 January Israeli occupation forces entered the Palestinian-controlled H1 area of the city for the second time in a week. The soldiers forcibly entered homes; in one house five soldiers kicked the front door and forced their way past a young boy. On hearing the disturbance Sabri Dwaik aged 29 got out of bed and went downstairs. The soldiers attacked Sabri, pinning him to the floor and hit him with a rifle butt on his head. Sabri was handcuffed and still in his pyjamas was dragged out onto the street. The soldiers then threw a sound bomb towards the front door to deter anyone from following them.

One of Sabri’s cousins, who had gone onto the street to see what was happening, tried to intervene. The cousin attempted to free Sabri but was beaten, thrown on the floor, and dragged away by the neck. The Israeli occupation forces detained both men against a fence, pushing them and pointed their guns at them. After talking amongst themselves the soldiers decided to release Sabri’s cousin but Sabri was dragged passed the road gate into the Israeli-controlled H2 area of Tel Rumeida. Thirty soldiers brought people out of their houses and lined them up against a wall just inside H2 making them stand in the cold, wet night. Sabri was arrested, marched to a police vehicle and taken to Kyriat Arba police station.

Sabri’s mother who is in ill health was very distressed by the events of the evening. The peace and quiet of another Tel Rumeida night was destroyed by the violence of the Israeli occupation forces. Local residents conjectured that the increased levels of violence and aggression of the Israeli occupation forces in the area is a response to the two well publicised incidents recently in Qufr Kadoum and Bab al Zawia, Hebron, where the Israeli occupation forces were seen to be weak in the face of Palestinian youth and their unarmed resistance. If the Israeli military are trying to send a message of intimidation to peaceful Palestinian residents of Tel Rumeida, then the message is clear: the Israeli military has no interest in peace, breaking into houses and forcing people out of their home in the middle of the night. Also the Israeli military has no interest in the due process of law, attacking people for no reason and when they complain, threatening that they will have to stay in custody for three days to do so. These increased levels of aggression and violence will not bring peace or stability to the troubled community of Tel Rumeida.