Over the past three days, the village of Urif, south of Nablus, has been under constant attack from Israeli settlers and soldiers. Soldiers invaded the village twice and numerous people sustained injuries from rubber-coated steel bullets and tear gas canisters. People in Urif said that settlers attack their village almost daily, especially now that Palestine has been granted observer member status in the UN. 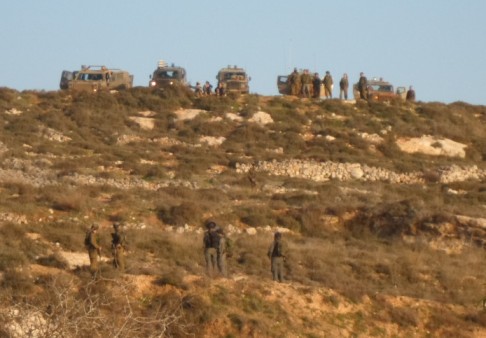 Soldiers on the hills overlooking Urif

The latest attack started on Monday, 24 December at 10 am when armed settlers attacked a school in Urif with stones. When youth from the village went to defend the school and confront the settlers, the Israeli military arrived and started shooting at people. Clashes continued until late in the evening, with live ammunition, rubber-coated steel bullets, tear gas and sound bombs fired at the people of Urif. Two non-violent international activists at the scene of the clashes shouted at the soldiers that these actions by the Israeli army and settlers were completely illegal and inhuman, at which point the army started shooting rubber-coated steel bullets directly at the activists. At sunset the army came running down the hills toward Urif and stopped at the outskirts of the village, from where they continued shooting live ammunition, rubber-coated steel bullets and tear-gas into the streets of the village.

Early on Tuesday morning, the Israeli soldiers invaded the streets of Urif and started shooting sound bombs and tear gas into the empty streets of the village.

Attacks resumed on Wednesday afternoon when settlers again attacked the school with stones. The same incidents which occurred on Monday were repeated on Wednesday, except that this time soldiers invaded the village at around 5 pm and shot tear gas and rubber-coated steel bullets into the middle of the village. One person was hit in the head by a rubber-coated steel bullet.

Urif has a long history of attacks by illegal Israeli settlers. Some years ago a person was shot by Jacob, the guard of the Yizhar settlement, who is notorious for attacks on Palestinians in the area. In May this year Jacob violently attacked a farmer in Urif, tied him up and shot him in the back. In the last few weeks, attacks on Urif have intensified as settlers, with the protection of Israeli soldiers, attacked the village on most days of the past month. 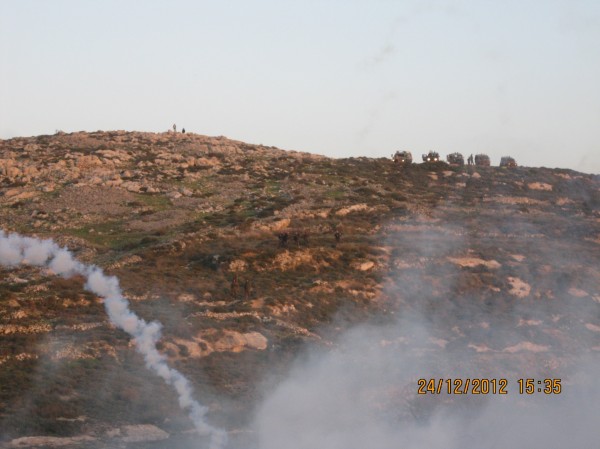