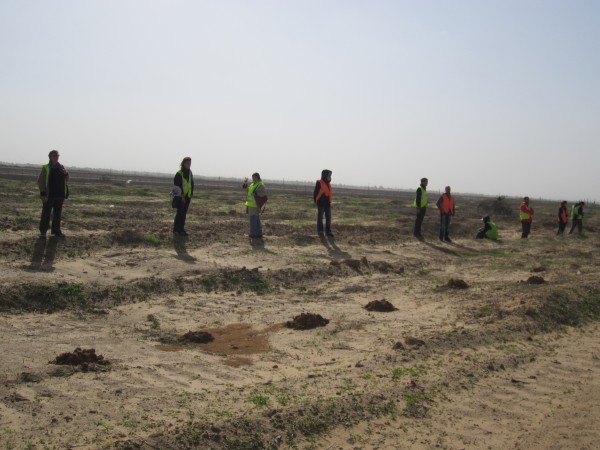 international activists working in Khuza’a, a small village outside of Khan Younis located near the Israeli border.  At 10:30 AM, the farmers arrived and began to plough approximately 100 meters from the separation fence while internationals lined up in between the border and the farmers. They were quickly met by an Israeli military jeep and transport vehicle. An Israeli soldier issued a warning in Arabic to leave the area and then fired two rounds into the air. The farmers and internationals remained calm and continued their work and the Israeli soldiers left the area.

At around 11 AM, approximately 20 Palestinians and farmers gathered around 300meters back from the fence. Two military jeeps returned to the area.  One soldier exited his vehicle and fired four shots in the direction of the farmers and activists.  The fourth shot crossed the line of the activists and landed in the field being ploughed.  Again, the Palestinians and internationals were not deterred. The Israeli jeeps left and the farmers finished working on this section of land and moved on to an adjacent plot.

Fifteen minutes later, two Israeli jeeps returned, one equipped with an automatic machine gun.  A soldier fired three canisters of tear gas directly in front of the activists.  He proceeded to shoot at the tractor, damaging its engine and bringing the work to a halt.  An international was accompanying the driver aboard the tractor. The accompaniment team included participants from Spain, Italy, France, England, Scotland, Germany and the United States

Gazan farmers successfully ploughed and sowed wheat in adjacent plots, with the presence of internationals, during the two days prior to the incident.  Though they were issued warnings by Israeli forces to stay 100 meters from the fence, they were not fired upon in a similar fashion. “This incident is a prime example of the military harassment and unpredictability of the Israeli occupation forces that farmers routinely face while working their land in Gaza,” said a solidarity activist from Spain.  For a report from the previous days farming, see https://palsolidarity.org/2012/12/gazan-farmers-at-work-in-kuzaa/.

Residents from Khuza’a said they have not planted in this area, declared a closed military zone by Israel, for the past thirteen years.  Formerly an orchard, Israeli forces bulldozed the field multiple times during military incursions and regularly shoots at farmers who attempt to work there.  Farmers were under the impression that this area was now accessible after the November 21st ceasefire’s stipulations that Israeli forces would “refrain from targeting residents in the border areas” and to “stop all hostilities in the Gaza Strip land, sea and air including incursions and targeting of individuals.”  This is the optimum season for planting wheat and the Gazan farmers only have a small window of time in which to work before the land will be rendered unusable.