Gazan farmers at work in Khuza’a 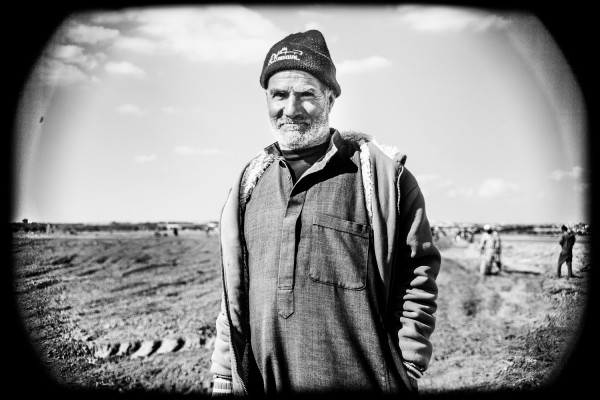 farmers from Khuza’a, a small village near Khan Younis, worked on their land in defiance of Israeli military harassment. Farmers ploughed approximately seven dunams and then sowed wheat in a plot that they had previously been denied access to before the November 21st, 2012 ceasefire.  The farmers successfully worked up to 100 meters from the separation fence.  The Israeli military arbitrarily designates this area as a restricted military buffer zone, otherwise known as the “kill zone.” According to the workers, they have not been able to farm on this specific plot of land for the past ten years.  Formerly an orchard, Israeli forces bulldozed the field multiple times during military incursions and regularly shoots at farmers who attempt to work there.

At approximately 8:00 AM, the Palestinian farmers began their morning‘s activities when two Israeli tanks, one military jeep and five bulldozers lined up across from the farmers on the Israeli side of the fence, threatening to fire. Around 9:30

AM, the farmers were joined by a group of 14 solidarity activists from Gaza, Catalonia, Italy, France, England, Ireland, Scotland, Germany and the United States.  The Israeli forces left after half an hour and were quickly replaced by two more military jeeps.The Palestinians and internationals stood their ground approximately 100 meters from the fence despite multiple Israeli warnings to leave the area. One of the international activists accompanied a Gazan driver aboard his tractor to act as a deterrent to Israeli fire.  Other farmers sowed wheat by hand. The work concluded around 12:30 PM without any fire from Israeli forces.

This was a small,yet very important victory for the farmers, especially as Israel has frequently and unapologetically breached the ceasefire’s stipulations to “refrain from targeting residents in the border areas” and to “stop all hostilities in the Gaza Strip land, sea and air including incursions and targeting of individuals.”