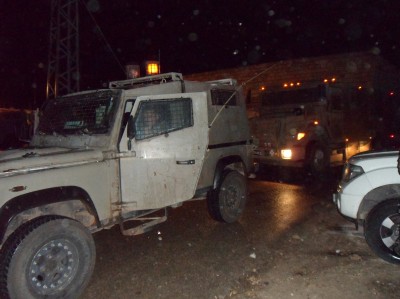 Haris as they do many times every year. They immediately imposed a strict unannounced curfew. The Israeli military tell nobody this will happen, nobody can leave their homes, nobody is able to visit a doctor or a hospital. If settlers attack your home you must deal with it alone. Kifl Haris is a Palestinian village in the northern West Bank, located six kilometres west of Salfit and 18 kilometres south of Nablus. Unfortunately for the villagers of Kifl Haris they are amongst the nearest village to the West Banks largest illegal settlement Ariel.

The pretext of the invasion into Kifl Haris is a pilgrimage to three disputed tombs, praying and dancing at a site they claim holds the remains of biblical ancestors. But as a resident explained, if they want to visit the tombs, why does it have to start in the middle of the night, and go onto the morning? Why do my children have to lay awake as they sing and drink alcohol? This isn’t about religion. This about them continuously intimidating us and seizing our land.

Settlers invade the village anywhere between 5 or 10 times a year, with an Israeli military escort. Last year at around the same time around 10,000 settlers invade the village of Kifl Haris. They arrived at midnight and stayed till around 7 in the morning. This year as we awaited the arrival of the settler party we heard reports that 60 bus loads were waiting at the entrance to the village. Fortunately the weather took a turn for the worse and the rain began to fall very heavily, only a fraction of the numbers of Israeli’s that were expected actually made streets of Kifl Haris.

On certain visits the settlers have caused various different sorts of damage the village of Kifl Haris. They have forced their way into peoples homes leaving a trail of destruction behind them and often have damaged cars, by puncturing tyres or smashing windows. As the rain continued to fall the organisers began to pack belongings away earlier than expected by 2am in the morning. Although the settlers left early the Israeli Military continued to aggressively and beep there horns and rev their engines, in what certainly seemed to be intimidation.