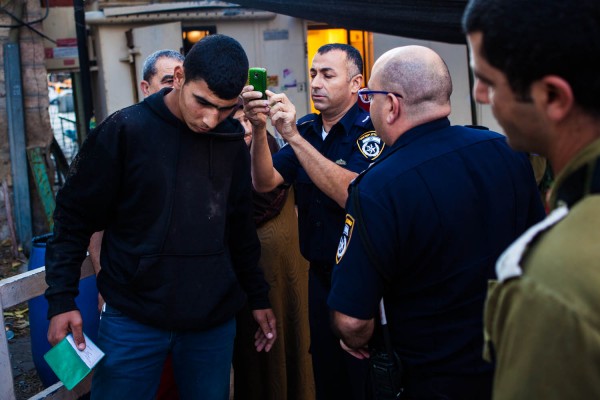 Police take photographs of injuries at Checkpoint 56 in Hebron 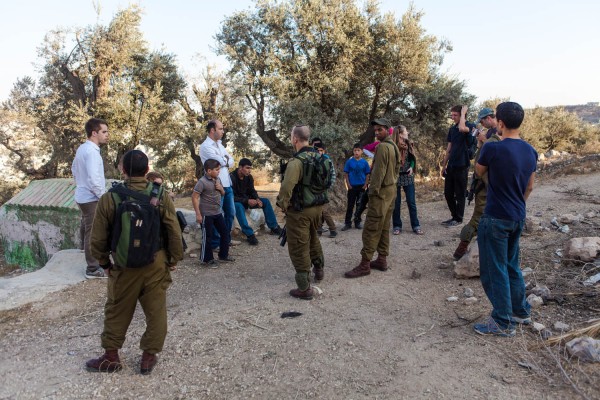 On Thursday in Hebron, Palestinian activist Imad Al Atrash was beaten by an illegal Israeli settler whilst two soldiers watched, without intervening.

Imad reports that he was walking through an olive grove in Tel Rumeida when a man from a nearby illegal settlement shouted abuse at him. Imad called for a nearby Israeli soldier to witness the abuse, but two soldiers merely watched as the settler began attacking Imad, at one point using a stone as a weapon. Imad suffered blows to the head, back and leg. Following this, his attacker fled the scene.

(This attack follows a recent arrest of Imad by the army only a couple of weeks ago, see: https://palsolidarity.org/2012/10/3-arrested-as-palestinians-attacked-by-settlers-and-soldiers-in-tel-rumeida/ )

A group of soldiers who then arrived at the scene denied that it was possible for CCTV footage of the attack to be reviewed. The two soldiers who had witnessed the attack would not provide their names or military identification numbers, to ensure that they could be called to provide evidence against the settler. Impunity for settler violence is compounded by soldiers refusing to testify against the Israeli attackers, or testifying falsely. According to the Geneva Convention of 1949 and the Hague Convention of 1907, ‘in any area under military occupation, responsibility for the welfare of the population falls on the occupying power’, an obligation which Israel is clearly neglecting.

Imad required medical attention and was taken to a hospital in Hebron, where he was monitored for three hours. There has been a long history of settler attacks on Palestinians in Tel Rumeida, where some of the most extreme Zionist settlers in Hebron are based. The violence is often random and extreme – for example, in the last month alone, there were attacks by settlers and soldiers in Tel Rumeida during the olive harvest. See: