VIDEO from the action:
Dozens of Palestinians and internationals protest at Rami Levy Supermarket near the illegal settlement of Sha´ar Benyamin on October 24th. This direct action aims to highlight the Boycott-Divestment-Sanctions (BDS) Campaign that seeks to promote a boycott of Israeli goods.

Four people, including Bassem Tamimi, the head of the Popular Committee of Nabi Saleh, were arrested by Israeli police today as Palestinians staged a peaceful direct action in an Israeli supermarket near the illegal settlement of Shaar Binyamin, north of Ramallah, calling for a boycott of Israeli goods. Two Palestinians were injured and removed in ambulances. Before he was arrested, Tamimi’s ribs were reportedly broken.

Two of those arrested were international human rights activists. One is an American and the other is from Poland. The American activist was dragged away by four Israeli officers.

Starting at around ten this morning, Palestinians and international activists gathered in the parking lot of Rami Levi supermarket, which is frequented by Israelis from the surrounding illegal settlements. The activists entered the market and walked up and down the aisles, holding Boycott, Divestment, Sanctions (BDS) placards and waving Palestinian flags.

Demonstrators left the market voluntarily when the Israeli army arrived on the scene. As activists exited the building, about forty police, border police and soldiers were waiting in the parking lot. There, the Israeli authorities attacked the demonstrators and fired sound bombs at them.

Even though the demonstrators remained non-violent, soldiers punched, dragged and choked them. As one Palestinian man was pulled away from the soldiers by other demonstrators, to prevent his arrest, his walking stick was taken away as he lay on the ground – following this, he could not walk without assistance. A sound bomb was thrown just metres from the head of another Palestinian man who was already unconscious following attacks from the authorities.

Bassem Tamimi is the head of the popular committee of Nabi Saleh, a village that has suffered drastically from the creation and expansion of illegal settlements in the West Bank. Halamish settlement was created less than 1km away from Nabi Saleh, stealing a great deal of the villages’ land, as well as a spring that provided a vital water source for the village. Tamimi was released from prison in April of this year after spending 13 months in an Israeli prison for being accused of “taking part in illegal gatherings.” He was released on bail in April in order to take care of his elderly mother who had suffered a stroke.

The action today aimed to highlight the BDS campaign (www.bdsmovement.net ), which calls for a boycott of Israeli goods.

The status of the detained demonstrators is currently unknown, they remain held in the police station of the illegal settlement of Shaar Binyamin. 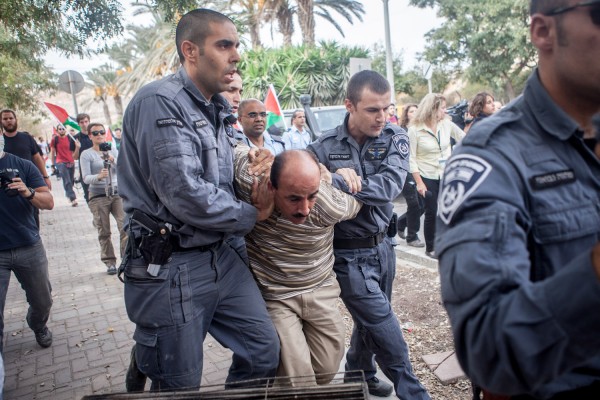 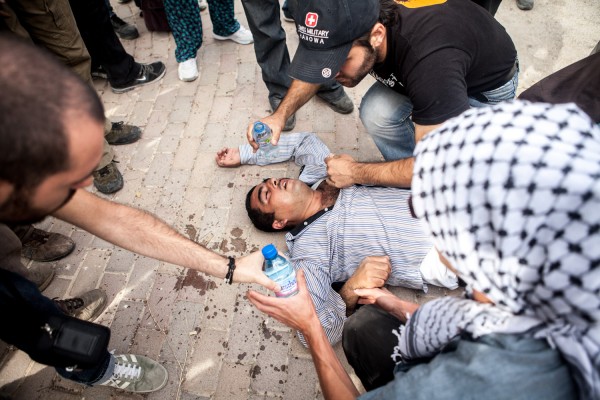