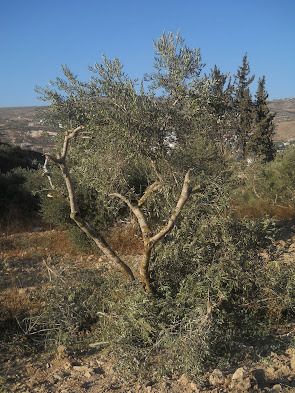 Under the cover of dark,  settlers from Yitzhar entered the olive grove of the Nasser Qadous family and began cutting the branches from his trees. This is not the first attack on his land. Two years ago, the settlers burned his land, which consists of 5 dunums. The following morning Nasser Qadous arrived in the olive grove and found all his olive trees destroyed. After one hour the Israeli army, police, and The District Coordination Office (DCO) arrived at his land. They spoke with Nasser but he says that they have taken no action to find those responsible.g 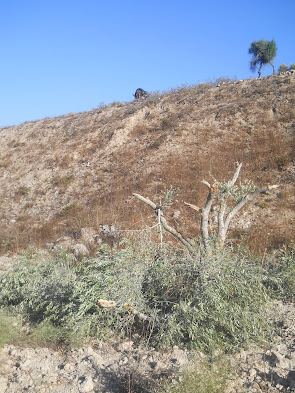 Located  7 kilometers southwest of Nablus, Burin is home to 3000 residents. From every position within the village you can see evidence of the Zionist occupation. Three of the most volatile Israeli settlements within the West Bank, Yitzhar, Bracha and Givat Arous reside on the hilltops of Burin. Yitzhar is the largest of the three settlements and was founded in 1984. Yitzhar consists of 1233 dunams and according to Peace Now, 35 per cent of the land is privately owned Palestinian land. The villagers in Burin are predominantly farmers and the fields that surround the village full of olives trees are testament to this. However, the land has been under threat since the start if the occupation in 1967.

Yitzhar settlement is notorious for its fanatically ideological residents, the violence they inflict on neighboring Palestinian communities, and the extremist doctrines they espouse. Settlers have frequently launched attacks with rocks, knives, guns and arson on Palestinian families and property in the area. In one of the most extreme act of terrorism students of the Yitzhar Od Yosef Hai yeshiva fired homemade rockets on Burin in 2008.

Despite West Banks settlements’  status as illegal under international law, Yitzhar was included in the Israeli governments’ recent “national priority map” as one of the settlements earmarked for financial support. Construction has continued unabated in both Yitzhar and Bracha. Yitzhar and Bracha also receives significant funding from American donations, tax-deductible under U.S. government tax breaks for ‘charitable’ institutions.