What would you do if 30 men armed with sticks and guns stormed into your home beat your little brothers and began beating your mother and ripping her clothes?

On August 28 this happened to sixteen year old Jalaal Daraghmah. He did his best to protect his family. He grabbed a pick used for gardening, and stood at the door of his house and told the settlers he would not let anyone in. When one of them tried to enter by force Jalaal hit him with the pick. The Israeli police arrived on the scene, and they ignored the two little boys that were beaten so badly they needed to be hospitalized, the mothers bruises and torn dress, and the family’s car that had been completely destroyed by the settlers. They instead arrested Jalaal and his father Khalid. No settlers were sought for questioning or detained. The Israeli press treated what happened as a “terror attack” and dubbed It a“Axe Attack”. Jalaal has been in Israeli custody since. 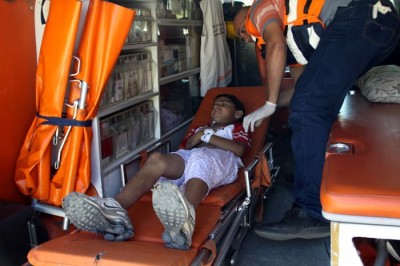 Jalaal’s little brother, Nour al-Deen being treated in an ambulance after the attack. (Photo courtesy of Wafia – International Communities Against Israel).

Starting today until Thursday Jalaal can be released on a five thousand shekel bail ($1300) Jalal’s family can not afford to free him. With your help they can bring him home before the long holidays that will force him to remain in Israeli custody.

Please send what you can through the ISM donate link make sure to send an email to palreports@gmail.com to say how much you have donated for Jalaal’s release.

For the past four years the Daraghmah family have faced regular attacks by Israeli settlers at their home in Khan al-Lubban, simply for attempting to remain on their land. Help Bring Jalaal home to his family.

Update: Thanks to you we  raised all the money necessary for Jalaal’s bail and he was released yesterday!