New
Home / Hebron / A day of violence and intimidation in Hebron

A day of violence and intimidation in Hebron

On the morning of September 10 in south west Hebron, at Checkpoint 56, a Palestinian man was shot with live ammunition by the Israeli military. Residents and army officials reported that Molotov cocktails were thrown at the checkpoint, and in response the soldiers fired with live bullets. Kamal al-Batsh, aged 31, was shot in the leg and was eventually transported to a hospital in Jerusalem, although Palestinian ambulances were prevented from arriving at the scene. 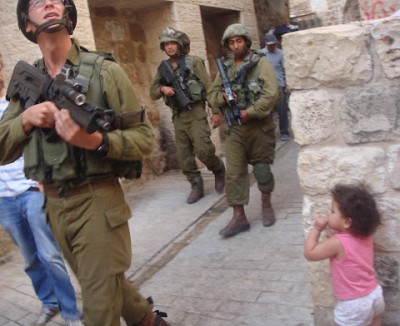 Soldiers move through the old city of Hebron

With ongoing strikes and protests taking place across Hebron, the army was deployed heavily throughout the city and schools were declared closed. A group of six soldiers were seen patrolling the market in the old city, brandishing their semi automatic rifles around corners and through the windows and doors of Palestinian houses. At 10 A.M. the situation at Checkpoint 56 became increasingly volatile, with soldiers shooting teargas, affecting innocent children and passers by. Checkpoint 56 divides the Palestinian city of Hebron in two areas H1 and H2. Special area H2 is a shared area, where over 500 settlers live, and Palestinian movement is heavily restricted. 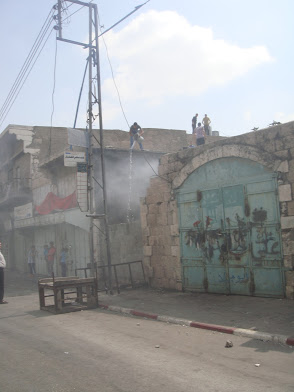 Those throwing stones from the street faced the Israeli military wearing full combat gear and armed with semi automatic weapons and tear gas. At least 14 soldiers were seen on the rooftops surrounding Checkpoint 56, where later in the afternoon multiple rounds of tear gas were shot into the streets. In the old city, eyewitnesses reported that a fire was set by the Israeli military. 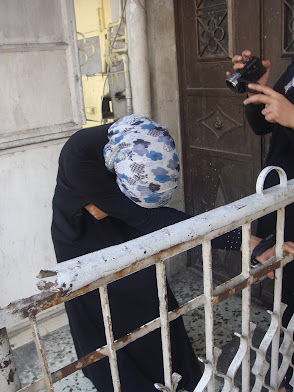 In the afternoon the situation around the Checkpoint 56 area became progressively more violent. Despite several internationals and media activists being present on the streets documenting the scene, rounds of tear gas continued to be fired directly at protesters. Dozens suffered injury and asphyxiation from the teargas, including a Palestinian camerawoman who was hit in the stomach with one of the five-inch metal canisters. A second tear gas round fired immediately afterward barely missed her foot. She had been standing in an isolated group with several international activists, all of whom were filming and photographing the soldiers peacefully. As there was no one else in the vicinity, international activists suspected that it was a targeted attack by the military.

The woman was taken away by an ambulance after sustaining the injury. Witnesses also saw many protesters affected by inhalation of tear gas, including children who were walking alone in the area. It was during this time that several checkpoints were closed, trapping individuals in the midst of the violence.

The events described at Checkpoint 56 were separate to the widely reported protests against the Palestinian Authority (PA), which occurred in a different area of the city. The demonstration witnessed by international volunteers appeared to be sparked by the shooting of Kamal al-Batsh the night before and targeted Israeli occupation rather than the PA.

Anna Conroy is a volunteer with the International Solidarity Movement (name has been changed).