New
Home / In the Media / Video: Soldiers attack children in Nabi Saleh and forcibly separate them from their detained mother

Video: Soldiers attack children in Nabi Saleh and forcibly separate them from their detained mother

During the weekly demonstration in the village of Nabi Saleh, yesterday, Friday, dedicated to support the Palestinian prisoners in Israeli jails, some of the villagers of Nabi Saleh, along with other activists managed to get to the entrance of village’s spring “Alqaws” which was taken over by the settlers three years ago. Soldiers forcibly prevented them to approach the spring at the same time settlers were swimming in.

Soldiers detained three Palestinian women, one Israeli activist and one American journalist. Among the detainees was Nariman Tamimi (36), a resident of the village and a Popular Resistance activist. Her Daughter, A’hd Tamimi (11) and two nephews, Marah (11) and Wiaam (11), were attacked brutally by soldiers preventing them from reaching the spring, and separating them from Nariman during her detention. 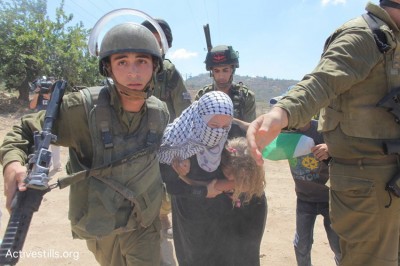 After the arrests, the army raided the village, sprayed “skunk” water and threw stun grenades and tear gas at houses, and used live ammunition through the clashes with the residents. During the raids on the houses, several residents were injured, including: Azmi Tamimi (70), injured in his finger from a rubber bullet shot from point blank range, Martyr Mustafa Tamimi’s grandmother (90), injured in her leg from two rubber bullets, as she sat at her house door, Halla Tamimi (48), injured from a stun grenade thrown into her house and Ahmed Shaker (11), injured in his chin from rubber-coated steel bullet, in addition to several injuries from rubber-coated steel bullets. During the raid, the army arrested another Israeli activist from one of the houses.

The six detainees were held for more than eight hours, in violation of the law, which only permits holding detainees for a maximum of three hours (or six hours in extreme cases), before they are arrested. At 9pm, soldiers put detainees on an army vehicle and drove them for an hour though different settlements roads then drove back to Nabi Saleh entrance where they were dropped off and released. 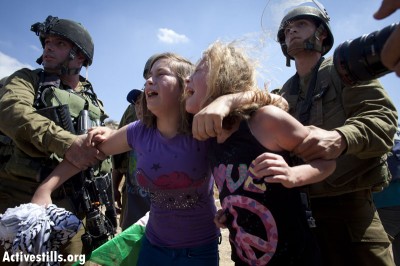 Israel soldiers holding back Nariman Tamimi’s children as she is being arrested (Photo Courtesy of Oren Ziv – Activestills.org

Late in 2009, settlers began gradually taking over Ein al-Qaws (the Bow Spring), which rests on lands belonging to Bashir Tamimi, the head of the Nabi Saleh village council. The settlers, abetted by the army, erected a shed over the spring, renamed it Maayan Meir, after a late settler, and began driving away Palestinians who came to use the spring by force – at times throwing stones or even pointing guns at them, threatening to shoot.

In order to prevent the villagers and their supporters from exercising their fundamental right to demonstrate and march to their lands, soldiers regularly use disproportional force against the unarmed protesters. The means utilized by the army to hinder demonstrations include, but are not limited to, the use of tear-gas projectiles, banned high-velocity tear-gas projectiles, rubber-coated bullets and, at times, even live ammunition. The use of banned 0.22″ munitions by snipers has also been recorded in Nabi Saleh.

The use of such practices have already brought about the death of Mustafa Tamimi and caused countless injuries, several of them serious, including those of children – the most serious of which is that of 14 year-old Ehab Barghouthi, who was shot in the head with a rubber-coated bullet from short range on March 5th, 2010 and laid comatose in the hospital for three weeks. Due to the wide-spread nature of the disproportionate use of force, the phenomenon cannot be attributed to the behavior of individual soldiers, and should be viewed as the execution of policy.

Between January 2010 to date, the Israeli Army has carried more than 100 arrests of people detained for 24 hours or more on suspicions related to protest in the village of Nabi Saleh, including those of women and of children as young as 11 years old. Dozens more were detained for shorter periods. Two of the village’s protest leaders – Bassem and Naji Tamimi – arrested on protest-organizing related charges, were recognized by the European Union as human rights defenders. Bassem Tamimi was also declared a prisoner of conscience by Amnesty International.