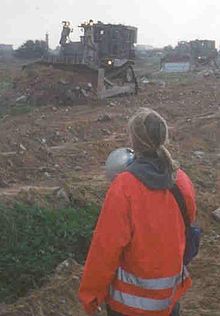 The International Solidarity Movement (ISM) is deeply concerned by the verdict of Judge Oded Gershon that absolved Israel’s military and state of the 2003 murder of American ISM activist Rachel Corrie. Rachel was crushed to death by an Israeli army bulldozer while protesting the demolition of a Palestinian home in the Gaza Strip.

Despite the American administration stating that the Israeli military investigation had not been “thorough, credible and transparent” and the Israeli government withholding key video and audio evidence, Judge Gershon found no fault in the investigation or in the conclusion that the military and state were not responsible for Rachel’s death. Judge Gershon ruled that Rachel was to blame for her own murder and classifies her non-violent attempt to prevent war crimes as proof that Rachel was not a “thinking person”.

By disregarding international law and granting Israeli war criminals impunity Judge Gershon’s verdict exemplifies the fact that Israel’s legal system cannot be trusted to administer justice according to international standards.The ISM calls on the international community to hold Israel accountable by supporting the Palestinian call for boycott, divestment and sanctions (BDS) and continuing to join the Palestinian struggle in the occupied Palestinian territories.

Describing the situation in Gaza two days before she was killed, Rachel said, “I’m witnessing the systematic destruction of a people’s ability to survive. It’s horrifying.” Rachel’s analysis holds true today, confirmed by the United Nations a day before this ruling, which reported that Gaza would not be “liveable” by 2020 barring urgent action.

This will not deter us. As long as our Palestinian sisters and brothers want our presence, the ISM will continue to find ways to break Israel’s siege, and stand in solidarity with the Palestinian people. As Rachel’s mother Cindy said, “There were children behind the walls of the home Rachel was trying to protect…We should have all been there.”

Judge Gershon’s verdict is a travesty of justice but it is not exceptional. As a rule the Israeli legal system provides Israeli soldiers impunity to commit murder. The only Israeli soldier convicted of manslaughter since the outbreak of the second Intifada in 2000 was Taysir Hayb, a Bedouin citizen of Israel for shooting British ISM volunteer Tom Hurndall in the back of the head with a sniper rifle as Tom was carrying a child to safety. At least 6,444 Palestinians have been killed by the Israeli occupation forces in this period, with no justice for them or their families.