On the evening of August 2, an Israeli settler illegally entered a Palestinian home in Hebron, drawing the presence of the Israeli army which encouraged her to leave. Rather than face any consequences, the settler left the scene and a Palestinian man was arbitrarily arrested. 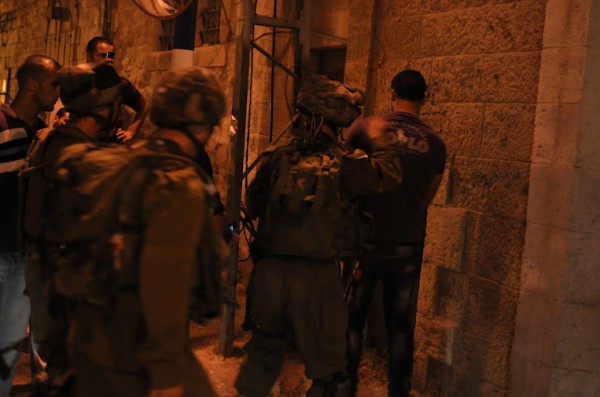 A Palestinian man is detained at Checkpoint 56 | Flora Alnur

Around 9:45 p.m., an illegal Israeli settler stopped her car in front of Checkpoint 56, one of the barriers between H1 area (Palestinian-controlled) and H2 area (Israeli-controlled) in Hebron. Immediately after, the woman forcefully entered a Palestinian home. Israeli soldiers intervened and took the woman outdoors, urging her to leave.

Hebron is a Palestinian city, but several illegal Israeli settlements have occupied both the center town and surrounding areas. The settlers enjoy a series of benefits, such as the exclusive right of driving in H2, or the wide dismissal of complaints of violence from them. When settlers illegally occupied a downtown area of Hebron, rather than comply by international law, the Israeli government supported the theft by closing the central commercial street to Palestinian access. Palestinian shops were closed and people forced by circumstance from their homes as a result of the illegal settlement. 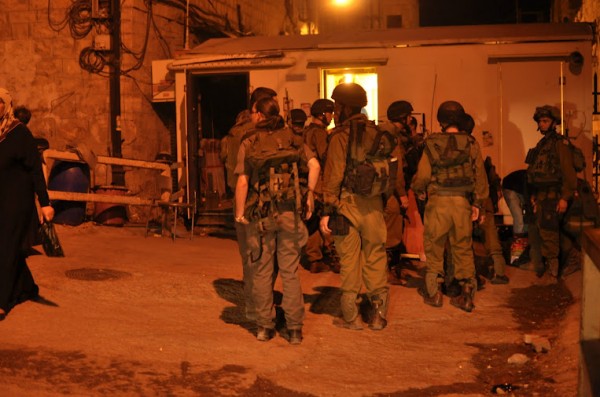 Before the settler left the scene, she aimed a camera against the faces of all people present. While Israeli soldiers remained impassive, a Palestinian man raised his hand to the camera to hide his image. At this moment, soldiers chose to intervene and stop the man, Sami Abo Rumeli, from raising his hand to the settler’s camera. Soldiers detained Sami and demanded his documents, simultaneously allowing the settler woman to leave without consequences to her actions.

International Solidarity Movement (ISM) volunteers and other Palestinians were present and documented the happening with photos and videos. Soldiers unsuccessfully tried to turn them away.

This unequal treatment of the settler who forced her way into a home, and Sami who attempted only to hide his face from her camera, caused a controversial reaction. Many people arrived to observe and document the event, causing several soldiers to group. Some 13 soldiers were surrounding Sami as he was detained. Eventually Sami was handcuffed and taken away. Before being released later that night, he suffered hits and mistreatment in the soldiers’ hands.

Video taken depicts the moment when Sami Abo Rumeli is surrounded by soldiers, to be detained without reason.

Lucy Diamond and Flora Alnur are volunteers with the International Solidarity Movement (names have been changed).