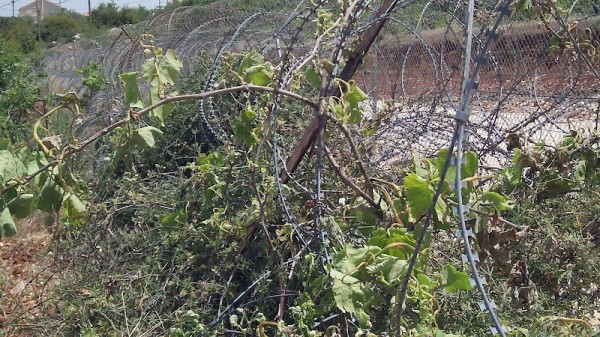 When Ali Awad visited his orchard on Friday morning before the midday prayer he noticed nothing out of the usual. But eight hours later, when he returned to his land in order to gather grape leaves to sell in the local market, he was shocked to find that his trees had been poisoned. The grape leaves, which Ali depends on substantially for income, had died and shriveled up, making them impossible to sell. Twelve peach trees belonging to Ali’s neighbor were also destroyed.

Ali’s three dunums of farm land, where 28 grape trees have been growing for over 30 years, are directly adjacent to the barbed wire fence which separates the Palestinian village of Beit Ummar from the illegal Zionist settlement of Karmei Tsur.

Horrified and dismayed, Ali called his brother, Muhammad, to come and take pictures of the destruction.  Before Muhammad could take any pictures, Israeli Occupation Forces and two older settlers arrived and  began to hassle the two brothers, threatening to confiscate Muhammad’s camera. The settlers, one of whom is the mayor of Karmei Tsur, told Ali that his plants were accidentally sprayed with pesticides when Karmei Tsur farmers attempted to destroy the weeds on their land earlier in the day. Ali’s grape trees are located at least ten meters away from the settler’s field, opposite a fence and settlement road.

Ali, whose wheat crop was burned during the night by settlers last year just before harvest time, does not believe that the destruction of his trees was an accident.

“Its not unintentional, like they say, they mean to do this,” he said. “They want me to leave my land. My presence is an obstacle to the expansion of the settlement.”

But Ali, whose family has already lost several dunums of their ancestral land to the illegal settlement, steadfastly refuses to leave.

“I have deeds going back to Turkish times, why should I leave? The land is for me, for my family, not for the settlers.”

According to the Israeli organization Peace Now, Karmei Tsur is built on 27% privately owned Palestinian land. The Fourth Geneva Convention forbids the construction of settlements in occupied territory.