On Wednesday, May 23, a group of Israeli settlers forcefully occupied the home of a Palestinian family near the illegal Tel Rumeida colony in the Palestinian city of Hebron. In an incident that lasted 3 hours, settlers forced their way into the house and began physically and verbally abusing the family. The family was evacuated by Israeli soldiers. The settlers then blocked the entrance, preventing the family from entering the premises.

At 6p.m., Muhammed Toma Aburmeli was working in his shop in Tel Rumeida when he received a call from his distressed wife requesting that he come home immediately. As he returned home he saw his wife and young children standing near checkpoint Gilbert, with his home surrounded by Israeli soldiers. Looking closer at the entrance of his home, Muhammed saw a large group of young Israeli settlers standing outside his doorstep and preventing the family from entering. 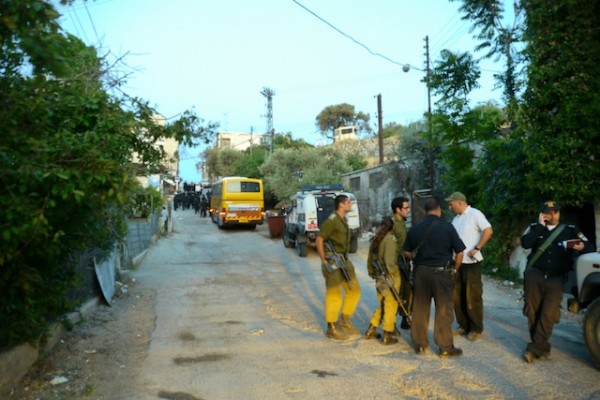 At approximately 5:30 p.m., Muhammed’s wife, Merfat Muhammed Aburmeli, and 4 children, the eldest only 8 years old, were inside their new home located on the same road as the illegal Tel Rumeida settlement. The family was preparing to move furniture into the house. As the preparations were underway a group of 15 to 20 settlers no older than the age of 16 stormed into the house.

The settlers immediately confronted the frightened family, insulting them and demanding that they leave the home. The young settlers repeatedly claimed that the land is theirs and that the Palestinian family has no right to live here. As well as the verbal barrage, the settlers began to violently push Muhammed’s wife and her children.

The harassment lasted 10 minutes before Israeli soldiers intervened. Checkpoint Gilbert is only 3 metres from the house so this can be considered a slow response on behalf of the soldiers.

Israeli military arrived and the settlers continued to abuse the family. The first thing the soldiers did was evacuate the Aburmeli family, rather than force the settlers to leave. The family was then ordered by the military not to return to their house until the settlers were gone.

The Israeli soldiers requested that the settlers leave. The young Israeli settlers ignored the request and ran through the house causing damage. 10 minutes passed before soldiers resorted to physical means to force them out of the home. The settlers showed resistance, shoving soldiers as they dragged them out.

After evacuating the premises, soldiers locked the house’s door. The young settlers then blocked the entrance to the home from the outside. The Israeli military made no effort to disperse the group and instead soldiers surrounded the house.

When Muhammed arrived at the scene he asked the soldiers what was happening. The soldiers shrugged off his question and instead demanded that he show identification. After handing back his ID card, he too was told to go stand with his family and wait for the soldiers to diffuse the situation.

Soldiers made no efforts to remove the settlers, and Muhammed and his family were left standing outside and waiting for almost 3 hours before the settlers began to leave by themselves at 8:30 p.m..

Muhammed, Merfat, and their young children returned to their home. They say that what is upsetting is not only the behaviour of the illegal Israeli settlers, but the incompetent reaction of the Israeli army. This harassment, however, is not a new ordeal for the Aburmeli family. Only one day before, settlers damaged a window of their home by hitting it with sticks. In their last home, located nearby, settlers similarly blocked the entrance on more than one occasion.

Families living near the illegal Tel Rumeida settlement, which occupied a section of houses and roads in downtown Hebron, have long been the subject of abuse and discrimination coming from both the settlers and Israeli policies. Currently, only 2 Palestinian families remain living in what is now the Israeli settlement.

These 2 families are not permitted visitors, even family members, because all other Palestinians are prevented by Israeli soldiers from entering. These families in particular face abuse by the Israeli settlers on a regular basis. It can be difficult for the families even just to walk without being pelted by stones or being subject to insults.