Urif is a Palestinian town in the Nablus Governorate of the northern occupied West Bank, located thirteen kilometres South of Nablus. The town has a population of just under 3000 inhabitants and is overlooked by the illegal Israeli colony of Yitzhar. Last week on Sunday, April 22, Urif’s boys school was attacked by mask-wearing settlers supported by four Israeli Occupation Force (IOF) soldiers who used tear-gas, sound bombs, and live ammunition against unarmed Palestinian children. 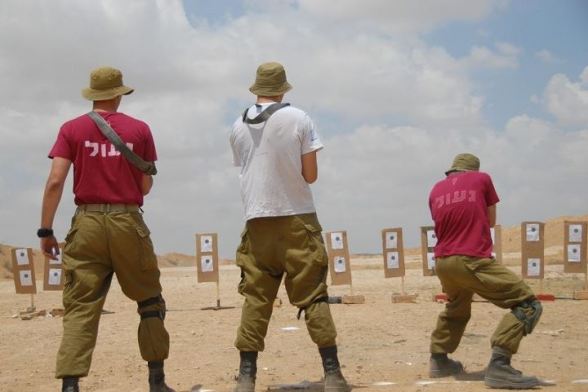 The settlers were led by the head of security for the Yitzhar colony, a man suspected in the murder of a resident of Urif in 2004, a murder that nobody has yet been charged with. He continues to lead brutal assaults against the civilian population of six Palestinian towns in the lands surrounding Yitzhar: Burin, Huwara, Madma, Assria Al-Kalibya, Ein Nabous, and Urif.
The attack began when the Yitzhar head of security and a number of masked settlers approached the school from an overlooking hill. “The children were sitting their mock exams,” said Arif, a member of the local popular committee, “the settlers used foul language and began throwing stones at the windows of the school.”

The settlers were soon joined by four uniformed IOF soldiers who did nothing to stop the abuse and stones hurled towards the school.

“When the army came they were supposed to stop the settlers coming to the school, in fact the opposite happened, there was chaos,” said Arif. A number of Palestinian youth approached the armed Israeli settlers and soldiers on the hill, using stones to resist the attack. The IOF soldiers then threw tear gas canisters down towards them and the school. One canister landed on the roof where a member of the Israeli human rights group B’tselem, Adil Safadi, was filming the attack.

Following the attack teachers from the school collected sixty tear gas canisters, a number of sound grenades, and at least thirty rounds of live ammunition fired directly over their heads.

In the video of the incident wherein International Solidarity Movement (ISM) volunteers are shown, the screams of the children and the loud report of an assault rifle being fired in fully automatic mode can clearly be heard. At one point an IOF soldier took aim with his M16 directly at a Palestinian youth out of camera shot. The sustained assault lasted for around an hour before the settlers decided to leave with their IOF minders in tow.

Whilst some children hid in their classrooms during the attack under the watchful eye of their teachers, many rushed to their homes and were exposed to large amounts of tear-gas and required medical attention. The children of Urif’s boys school, aged between 13 and 18, have been subjected to this kind of brutality on a regular basis since the founding of the school which sits on the outskirts of the village and is thus vulnerable to these kind of attacks. Many of the older kids that attend the school were in the process of studying for their year final examinations which take place in early May.

“You can’t imagine the loss we have suffered as a result of this settlement,” says Arif,  “we would like to live in peace and prosperity, but that is something we cannot gain. The settlers are very aggressive, there is no word in the dictionary to describe them.”

This is not the first time the settlers, supported by the military, have attacked the school. Roughly one year ago they attempted and failed to burn it down. ISM was shown pictures depicting the charred remains of one classroom that was severely damaged during the attack.

Incursions from Yitzhar into Urif and Surrounding Villages

Arif and members of Urif municipality informed ISM of the following.

The illegal colony of Yitzhar was founded in 1984. It was not until the beginning of 2000 that it began to aggressively expand into the surrounding Palestinian lands. Yitzhar illegally annexed vast swaths of land and barred access to the Palestinian farmers, shepherds, and villagers that have lived and worked the land for countless generations.

The village of Urif is a mere 1500 meters away from the Israeli colony, and since 2000, over 2200 dunams have been stolen by the nearby settlement. In addition, four thousand olive trees cultivated by the village have been uprooted or burnt by settlers in the past four years.

The villagers of Urif have no access to running water, instead they rely on a small number of ancient wells. Two years ago, members of the village were dismayed to find tear gas canisters had been dropped into one of the wells by unknown settlers, poisoning the water supply.

Any attempt to expand infrastructure in the village is also met with settler attacks. ISM volunteers were shown the remains of a house that had been under construction before it was attacked and completely dismantled.

“Late at night they launch attacks on the residents in this area,” said Arif, pointing to the rubble strewn skeleton of the destroyed house. A tractor and a number of cars belonging to residents of the village had also been destroyed in a series of recent arson attacks.

Settlers have shot through the windows of a number of the homes. Graffiti reading ‘revenge’ in Hebrew was scrawled across one residents house. The widespread attacks of agricultural land has lead to a vast “wasteland” between the outskirts of Urif and Yitzhar. Hundreds of goats, sheep, and a few horses have been stolen.

This is not to mention the violence towards the villagers themselves. Arif reports that hundreds of villagers have been injured since 2000, with as many as 40 serious injuries (many of which were gunshot wounds) and one murder.

The combined effects of this systematic assault on Urif residents’ way of life, economy, and civil society is akin to a form of ethnic cleansing. One of the most stark indicators of the impact of the measures taken against the village of Urif by Yitzhar settlement is that unemployment is as high as 40%. Many people simply cannot survive under these conditions and are thus forced to abandon the village of their birth, leaving behind their friends, family, and identity.

Chris Beckett is a volunteer with International Solidarity Movement (name has been changed).