Israeli Brutality: Violent arrests of Palestinians in Hebron and disappearance of Dutch volunteer

by Paige and Satu 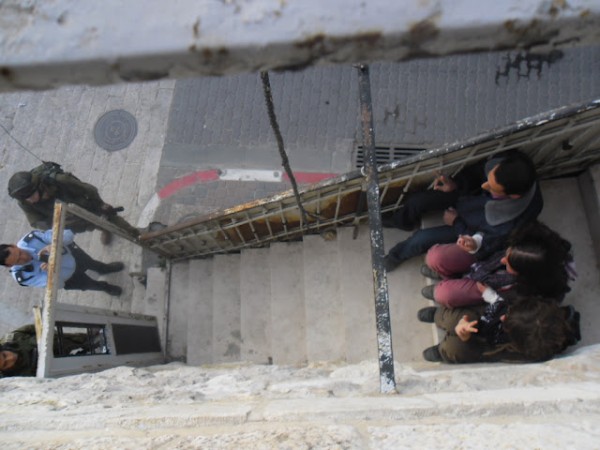 A Dutch woman and several Palestinians were violently arrested today during an attempt to reclaim a Palestinian house at the entrance of the old city in occupied Al Khalil  (Hebron).

About 30 Palestinians and international ISM activists from Canada, Finland, United States and the Netherlands entered a Palestinian house that was taken over by Israeli army around eight years ago. The re-occupation of the house was an attempt to return the house its rightful owner and was a response to the takeover of a Palestinian house on Shuhada street by settlers under the protection of the Israeli army and border police.

The windows of the house had been broken and the house was filled with trashed furniture, reminders of the families who had lived there. Stars of David and other graffiti covered the walls, and the floor was littered with the casings of rubber coated steel bullets and a tear gas canister. From the  front window the watchtower of the settlement Beit Romano is visible.

As activists started cleaning  the house and preparing to spend the night there, the Israeli army prepared  to invade the house with sound bombs, skunk water and soldiers in full riot gear. Over 50 soldiers and 5 border police blocked the road and cleared the surrounding area before entering the house that was being reoccupied, claiming that the house was now Jewish property.

The soldiers then entered the house and began to forcefully remove the non-violent protesters by punching, hitting with batons, kicking, pulling people from their hair and grabbing them from their throat before pulling them out of the house.

“I was dragged out down a flight of stairs by my ankle by a soldier” said an ISM activist from Canada. “The soldier had his boot on my face,” said an ISMer  from Finland.

One Palestinian was beaten until he became unconscious. He was taken to hospital with an ambulance with another injured person.   When internationals and Palestinians attempted to help the unconscious man, the Israeli army threw sound bombs by his head and then dragged him away by his feet.

The Israeli army threw sound bombs and sprayed skunk water at the crowd that had gathered to support the Palestinians and internationals.

The Dutch activist and Youth Against Settlements leader Issa Amro are still being held by police. The whereabouts of the Dutch activist are unknown currently, and an emergency hotline for the Dutch Embassy only suggested that an email be sent to detail the event.

The embassy employee commented that, “We can see to it that she is fed, bathed, and if she needs medicine.” When asked if he can attempt to locate her, he mumbled a comment about her attending a demonstration, and stated “Israel is a friend of the Netherlands, and we respect the law of the land.” He then suggested to call the Dutch Consulate during its working hours and to send information about the woman to its email address.

ISM is working vigorously to determine the whereabouts of its volunteer, yet is fearful that while the Israelis deny that she is held in one of their imprisonment facilities despite dozens seeing her physically taken away by Israelis, that they may be attempting to deport her without fair trial or an accusation as they did with a British volunteer in July 2011.

Update: Dutch activist was release from Israeli detention on Monday April 2nd. She was held for 24 hours in Israeli jail and released without trial. The Palestinian’s arrested in the action were released from Ofer Military Prison on Wednesday April 4th with 1,000NIS bail and will return for trial in October.

Satu and Paige are volunteers with International Solidarity Movement (name has been changed).