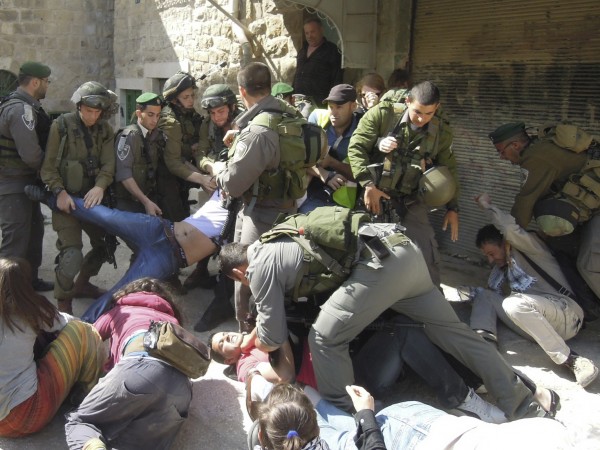 Twelve were detained and Three were injured after Israeli forces attacked participants of the Bili’n Conference on the Popular Struggle who toured Hebron.

Israeli Border Police officers attacked a group of Palestinians and Internationals who participated in the 7th International Bil’in Conference on the Palestinian Popular Struggle this afternoon. The incident took place during a tour of the Old City of Hebron. Eight Palestinians and four internationals were arrested and at least three people were injured by the blows they suffered at the hands of police. One Italian woman suffered an injury to her shoulder that required hospitalization.

About 200 Palestinians and Internationals attended the second day of the Bil’in Conference, which today took place at the old city of Hebron. After lunch, which was held at a school off of Shuhada Street, participants began to gather at the entrance of the Old City to begin a tour of the area. Settlers who passed by in their cars noticed the gathering and aggressively honked their horns at the group, but continued without incident. Two minutes later, Israeli Border Police officers arrived in the area and arbitrarily detained a three of the Palestinians. A second group of settlers then arrived at the scene in large numbers and began inciting the police against the conference participants, calling on the police officers to “eliminate” the them. the Border Police officers, now joined by regular police, then began pushing and beating the conference participants – men and women alike.

During the attack, the officers arrested eight Palestinians and four internationals. While most were released without charge shortly after, two Palestinians and two internationals are still held at the Hebron police station. Among those still held are two Italians and Issa Amro, a well known grassroots activist from Hebron, who was clearly arrested for who he is rather than anything he’s done. Amro has only recently spent nearly a week in detention after the army evicted Palestinians from a house in the city. The eviction took place despite the fact that the activists had legal claim to the house, which eventually forced the authorities to release Amro unconditionally.