Increasing Israeli army harassment and violence against activists in Hebron 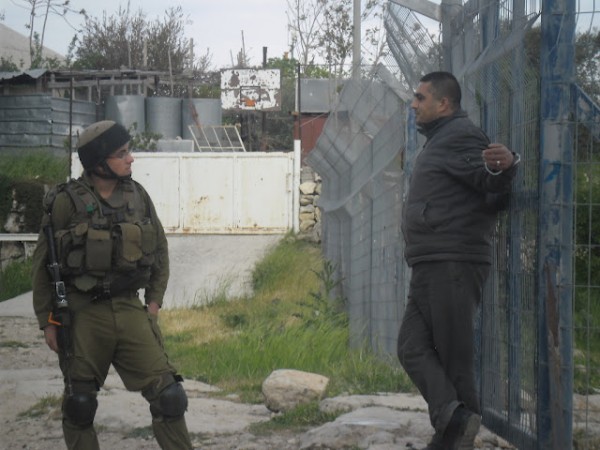 In the past weeks the Israeli army has increased harassment against both Palestinian and ISM activists in Hebron (Al Khalil), a deliberate targeting  of those who oppose Israeli occupation and colonization.   This targeting includes the arrest of six international activists, including five ISM volunteers, and four arrests of Palestinian activists, all within a two week period.  The Israeli army also raided a community event in Tel a Rumeida, detained Youth Against Settlements activist Issa Amro directly after his release from jail, and tied another Youth Against Settlements (YAS) activists to a fence.

On April 1st a Dutch activist and two Palestinians, including prominent YAS activist Issa Amro, were violently arrested during an attempt to reclaim a house belonging to the Hebron municipality.  Palestinians and internationals were dragged, kicked and hit, while another YAS activist was beaten unconscious. Amro and the Dutch activist were held for several days.

On April 8th the Israeli army attacked international activists documenting restrictions of freedom of movement and violence against Palestinians in what is supposed to be P.A. controlled Hebron, arresting one Palestinian American activist.  The next day  two international activists were arrested while simply walking through the old city of Hebron. They were interrogated about the events of April 8th and the names of internationals present on that day, then finally released after signing draconian conditions in Hebrew.

About an hour later a YAS activist walking in Tel Rumeida was stopped by soldiers, who tied both of his hands to a fence, for over 20 minutes.  After he was cut free, soldiers attempted to illegally arrest him and take him inside Tel Rumeida settlement.  A Canadian activist who intervened was shoved several times by soldiers, though they stopped there illegal arrest of the Palestinian man.  Eventually the police came and ordered the soldiers to release the man.

The escalation of violence and harassment against activists, international and Palestinian alike, will not deter us.  We will never be silent.