New
Home / In the Media / Extension of administrative detention of Dr. Yousef Abdul Haq for the second time

Extension of administrative detention of Dr. Yousef Abdul Haq for the second time 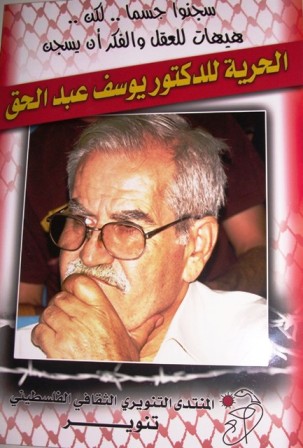 Human beings are born free, but we are surrounded by restrictions everywhere  Jean-Jacques Rousseau

Today on the thirty-sixth anniversary of the Palestinian Land Day, which confirms for our people the unity and integrity of our case, the unity of its land, and the right of return and self-determination, the Israeli military court has extended administrative detention for two more months and for the second time of the human rights lawyer Dr. Yousef Abdul Haq, 70, a lecturer at An-Najah National University and the Cultural Coordinator Forum of the Palestinian Cultural Enlightenment (Tanwer). He is currently detained in Ofer prison near the city of Ramallah.

Dr. Yousef Abdul Haq has been arrested since 7/11/2011, when he was taken from his home at two o’clock in the morning while suffering from illness. With his health and medical condition, he was transferred to a hospital immediately after his arrest to Ramle. He was sentenced to two months in administrative detention initially.

The arbitrarily administrative detention is legally incompatible with the most basic international standards of human rights, because it is without any specific charge against the prisoner. It also depends on the police file and secret evidence which cannot be seen by the detainee or defense lawyers. This file is prepared by the Israeli intelligence service with the intelligence information compiled in different illegal ways.

This type of detention is internationally banned not only for the specific category of the Palestinian people but internationally. It has been extended to include the arrests of  lawmakers in the Palestinian Legislative Council, members of local councils, university students, political activists, academics, trade unionists and also women and children.

The decisions of administrative detention of Article 111, in the system’s state of emergency, imposed by the colonial authorities during the British Mandate, over Palestine in September of the year 1945, are illegal on the grounds that Article 43 of the agreements for the International Court in the Hague (1907) prohibit an Occupying power from using illegal measures in the occupied country.

It is worth mentioning that most of the unjust laws against the Palestinian people arise from the era of the British colonial authorities and are kept in practice by the Zionist occupation, even though these laws were deleted at the time.

Administrative detention is the endless suffering of the prisoners because the detention might run into a decade’s time, during which stress plays on the nerves and psychology of the detainee and his family, based on the expectation that tomorrow the prisoner will be liberated. The International Solidarity Foundation for Human Rights received from Israel’s Court of Ofer that the number of administrative decisions issued by the Israel military governor amounted to a total of 5971 since the beginning of the year 2004 until the end of 2010.

We, of the Tanweer Forum, call for the release of our colleague, Dr. Yousef, immediately from behind bars, holding Israel responsible for his health. And we hold the Government responsible for the conditions of Israel’s occupation. We demand the closure of  administrative detention which is contrary to international law  and human and ethical values. On this occasion, we declare our solidarity with all prisoners on hunger strike calling for their release, especially in solidarity with the struggling Hana Shalabi.

We also call upon the Arab and international institutions, like An Najah National University, to expose the policy of administrative detention because of its destructive social impact, to the media internationally.

We call for the establishment of a professional united front working for the release of Palestinian freedom fighters — members of the Council of Jurists, legislative delegates, academics and university students, children and women– to end the filing of administrative detention forever.

Call for Action: Save Mohammed al-Qiq 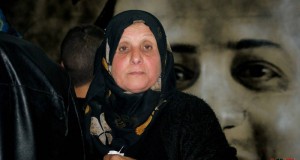 Last tribute for a martyred in Bethlehem : “Motaz was happy when he was facing to the sea, it gave him a sense of freedom, lightless that he hadn’t before.”