New
Home / In the Media / Deir Yassin: The peace that never was

Deir Yassin: The peace that never was 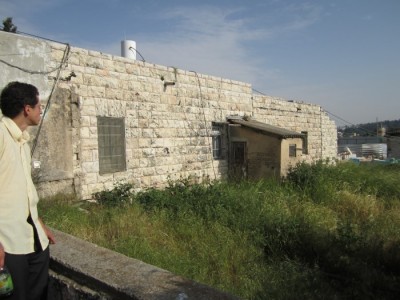 Two days ago, we visited Deir Yassin, or to be more specific, what remains of Deir Yassin, with Zochrot, an Israeli organization dedicated to educating the Israeli public about the nakba. The tour was organized in commemoration of the Deir Yassin massacre.

We walked along the main street of the village (now Kanfey Nesharim Street), and passed the few homes still standing, where many people were massacred.

The girls school, built in 1941, still stands. What used to be the city center is now a bus station. As for the homes, they are surrounded by a fence and have been incorporated into the Kfar Shaul mental hospital. After passing the homes (hospital), we walked by the remains of the Palestinian cemetery and ended the tour in the grove behind the hospital.

In April 1948, the town was attacked despite its peace treaty with the Jewish community. The killings at Deir Yassin are regarded as one of two pivotal events that led to the exodus of around 700,000 Palestinians from their towns and villages in 1948, along with the defeat of the Palestinians in Haifa. News of the killings, amplified by Arab media broadcasts of atrocity, triggered fear and panic among Palestinians, who in turn increasingly evacuated their homes.

55 young children were orphaned as a result of the massacre. 31-year-old Hind al-Husseini found them near the Holy Sepulchre church in Jerusalem’s Old City. On 25 April, two weeks after the massacre, Hind founded Dar Al-Tifl Al-Arabi at her family’s mansion which catered to Deir Yassin orphans, and later to orphans from all over Palestine.