This Occupation is brought to you by Corporate America

During a recent demonstration in Hebron (Al Khalil) demanding the opening of Shuhada street, protesters were subjected to something that could only have been thought up in the United States – a weapon which comes with its own commercial.  Amid the sound of concussion grenades exploding, an automated voice announces: “This is a test of the long range acoustic device, LRAD, from American Technologies Corporation.”  The strange automated message serves as a reminder that the Israeli occupation is not just a local or regional issue but one with important international dimensions.

The fate of Palestine has, for most of its history, been subject to the geopolitical and economic interests of powerful states.  During the wane of Ottoman power, Palestinians, along with other Arabs, revolted against Ottoman rule in alliance with the British in exchange for a promise that Britain would recognize the independence of Arab states.  At the same time Britain made a deal with France, known as the Sykes-Picot Agreement, to divide the Ottoman ruled territories among themselves.

That is exactly what happened when the League of Nations implemented the mandate system following the end of the second world war and the collapse of the Ottoman Empire.  France was given domain over what is now Lebanon and Syria, and Britain over Palestine, Jordan and Iraq.   The Ottoman empire defeated, with the help of Arabs promised self-determination in return, France and Britain were free to divvy up the Middle East and realize their colonial ambitions.

With the birth of the Zionist movement there was yet another European colonial project with its sights on the land of Palestine.  Zionism was inspired by European colonial concepts  like “terra nullius”, racial superiority over the native  population, and expulsion of this population through what was euphemistically referred to as “transfer.”

Ben Gurion, one of the founders of modern political Zionism, expressed his enthusiastic support for ethnic cleansing in 1937 when he wrote “In many parts of the country new settlement will not be possible without transferring the Arab fellahin. . . Jewish power, which grows steadily, will also increase our possibilities to carry out the transfer on a large scale. You must remember, that this system embodies an important humane and Zionist idea, to transfer parts of a people to their country and to settle empty lands.”

With European colonial concepts, funding from Europe and America, weapons and the Balfour Declaration from Britain, Zionism was far from a local project.  European and North American leaders saw the establishment of a Jewish state in the Middle East as advantageous, as a bulwark against “Asian barbarism” and a proxy state that could represent British, and later American, interests in the region.

American and European leaders with this same mindset would later pressure the UN General Assembly into supporting the 1947 partition plan.

Since the end of the second world war the most important source of support for Israeli crimes has been the American government.  Between 2000 and 2009, the United States gave Israel $24.1 billion of military aid, including more than 670 million weapons and related equipment  such as tear gas canisters, bulldozers, white phosphorous, ammunition and F16 fighter jets. During roughly the same period Israel killed at least 2,969 Palestinians and committed countless human rights abuses.  One example is the killing of 16 members of the Abu Halima family in 2009 by the Israeli army, who shelled their house with white phosphorous produced by American corporation Tiokol Aerospace.  A Human Rights Watch investigation into the use of white phosphorous in Gaza found that Israel’s use of the weapon constituted a violation of international humanitarian law and called on the United States to halt the transfer of  white phosphorous to Israel.

The international dimension  of Israeli human rights violations is also evident in the global reach of Israeli hasbara, from powerful lobbies like AIPAC to campaigns like Brand Israel, launched by the Israeli Ministry of Foreign Affairs in Toronto in 2008, with the aim of distracting from the occupation by highlighting Israeli culture, technology and contributions to medicine and science.

The implications for international activists are two-fold.  First, when your friends, your uncle, or a random stranger challenges your decision to go to Palestine by claiming that “it has nothing to do with you,” tell them that the tear gas canister that put Tristan Anderson in a coma was manufactured in the United States, and that the financial, military, and diplomatic support needed for Israel to continue committing crimes with impunity originates in the halls of our parliaments, congresses and government subsidized corporations.

Secondly, you must remember that volunteering in Palestine is only half the struggle, the real work begins once you step off that plane and go home.  That is why supporting the Boycott, Divestment and Sanctions is so important – Israeli oppression will never end until its international supporters realize there is a price to complicity.  Now seems a good time to teach American Technologies Corporation this lesson. 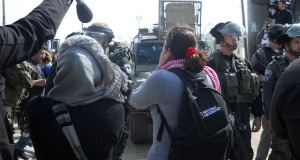 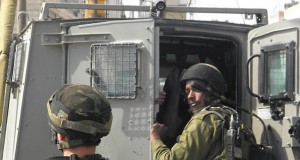 Beit Ummar steadfast in supporting prisoners despite LRAD and teargas