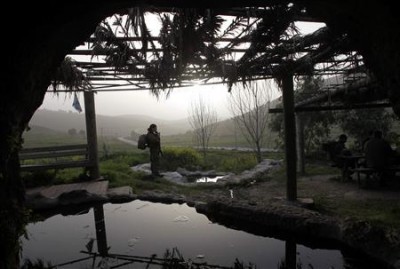 A female Israeli soldier stands next to a man-made pool containing water from a spring located near the West Bank village of Nabi Saleh, and the Jewish settlement of Halamish, near Ramallah March 19, 2012. REUTERS/Baz Ratner

The U.N. Office for the Coordination of Humanitarian Affairs (OCHA) said it had surveyed 530 springs in the West Bank and found that 30, mostly in areas where Israel retains military control, were taken over by the settlers.

It added that Palestinians currently had limited access to 26 other springs where settlers had moved in and threatened to take control. The report said settlers had not encroached on 474 remaining springs surveyed.

“Springs have remained the single largest water source for irrigation and a significant source for watering livestock,” the report said, adding that some also provided water for domestic consumption in areas not connected to pipelines.

“The loss of access to springs and adjacent land reduced the income of affected farmers, who either stop cultivating the land or face a reduction in the productivity of their crops,” the report said.

It added that settlers had turned dozens of springs into tourist sites and some were used for swimming.

“Settlers have developed 40 springs as tourist sites, deployed picnic tables and benches and given them Hebrew names … It is generating employment and revenue for the settlements and it is a way of promoting or advertising settlements as a fun place,” OCHA researcher Yehezkel Lein said.

David Ha’ivri, a settler leader, said settlers were using the springs “for purposes of recreation and for the people who live here, more so than for tourism purposes.”

In 2009 a spring named Ein el Qaws, located near the village of Nabi Saleh, was taken over by settlers from Halamish, forcing villagers to obtain their irrigation water from other sources, the report and residents said.

“The spring was used to irrigate hundreds of olive and fruit trees in the village and the children used to swim in it, now if we try to go to the spring, the settlers and soldiers come and kick us out,” said villager Nariman Tamimi.

A spokesman for Israel’s military-run Civil Administration in the West Bank said there was free access to the Ein el Qaws spring for everyone, except on Fridays when Palestinians usually mount protests against the spring’s takeover and soldiers keep people away.

He said Israel had curbed illegal building at one spring and had started legal proceedings against work at another site.

About 500,000 Israelis and 2.5 million Palestinians live in the West Bank and East Jerusalem, areas Israel captured in a 1967 war. Palestinians seek the territory for an independent state along with the Hamas-controlled Gaza Strip.

Palestinians say settlements, considered illegal by the International Court of Justice (ICJ), the highest U.N. legal body for disputes, would deny them a viable state.

Israel cites historical and Biblical links to the West Bank and says the status of settlements should be decided in peace negotiations.