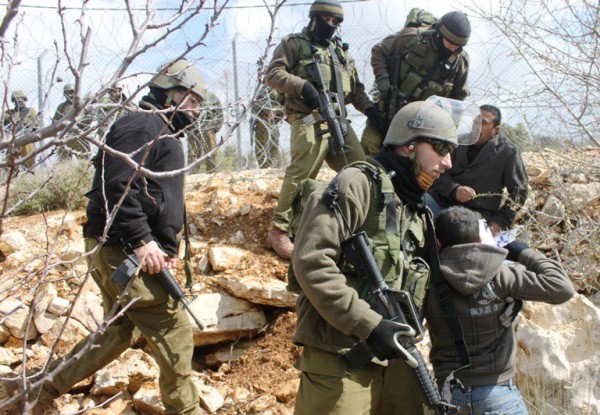 The Beit Ommar Popular Committee organized today’s weekly peaceful protest adjacent to Karmei Tzur colony built on the stolen land of Beit Ommar farmers. When we arrived next to the so called security fence surrounding the colony, more than 60 heavily armed Israeli occupation soldiers obstructed our path and tried with aggression to force us back, but we resisted their violence and carried on our protest program.
This protest was in solidarity with Hana Shalabi who has been on hunger strike for the last 31 days in the Israeli occupation jails, and in memory of the ninth anniversary of the martyrdom of Rachel Corrie, who was bulldozed by an Israeli occupation military bulldozer while she trying to stop the bulldozer from bulldozing a Palestinian house in Rafah in the Gaza Strip.
It’s important to note that the popular committee of Beit Ommar has been on hunger strike for the last two days in solidarity with Hana Shalabi.
Justice and Freedom for Hana Shalabi, Long live the memory of Rachel Corrie. LONG LIVE PALESTINE
Younes Arar is a coordinator for the Beit Ommar Popular Committee.
Beit Ummar Hebron Hunger strike Karmei Tzur settlement Prisoner Rights Rachel Corrie Settlement Settlers 2012-03-17
Yara