In memory of a hero: Rachel speaks truth 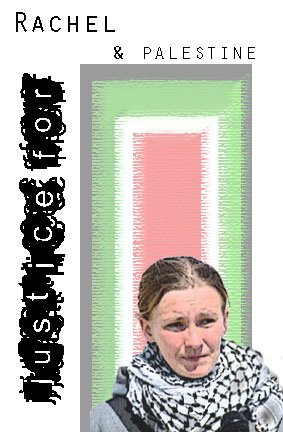 On the anniversary of Rachel Corrie’s martyrdom today, the rain fell in quiet tears that watered Palestine in a confusing emotion of remorse and yet optimism—the same optimism we hear in the voice of Rachel’s diaries and actions.

It rained on Kufr Qaddoum where attack dogs clenched in their jaws the peaceful freedom fighters of Palestine, an image reminiscent of a segregated America.

It drizzled as the folks of Al Ma’sara demanded the wall to fall, an echoing cry humanity heard from Germany.

And it watered on Gaza, where the dust never seems to settle between the murderous attacks of the Zionist military.

While Palestine is indeed special, it is obvious that it shares much with what the world has struggled for, and International Solidarity Movement threads the humanization of the world as the fabric of solidarity work with Palestinians.

Today Palestine and earth, the earth that has inherited the great sacrifices of Rachel Corrie, quietly wept and yet persisted with her memory for the very ideals she died for: freedom and justice.

Peaceful resistance against oppression never dies, and this reassures the international community that despite the images of Rachel facing the Israeli Goliath of colonialism, that she is still alive and with us in ISM, in Palestine, and in the world, as a spirit that will continue to inspire us.

In a letter she sent nearly a decade ago to her family, when she first left her hometown of Olympia, Washington in the US, she said:

While the struggle against occupation feels isolating at times, it is these words that reassure us that we are not alone, that Rachel is not alone, that the voiceless victims of Zionism are not taken for granted. This is not a tragedy which we mark, but the greatness of a peace activist. Nothing can crush the spirit of Rachel Corrie, one of thousands who sacrificed for the humanization and liberation of the Palestinian people.

Murdered in 2003 by an Israeli driven, military Caterpillar bulldozer, Rachel and seven other ISM activists in Rafah, Gaza, were trying to prevent the raising of Palestinian property and livelihood by Zionists. Dropping debris on her and then proceeding towards her is the exact lack of concern Israel has towards life that we see as Gaza faces continued collective punishment today.

She ended her letter in humble realization of her role that would later translate into the sacrifices of a peaceful revolutionary.

I can’t cool boiling waters in Russia. I can’t be Picasso. I can’t be Jesus. I can’t save the planet single-handedly.

She is with us now, from Susiya to Dora, Jabalia and Beit Hanoun, back down to Rafah and across to Jerusalem.

Rachel speaks truth. And so long as a grain of injustice exists in Palestine and this world, this truth will not settle for what is today’s reality of a violent, arrogant Israel that continues to demolish and kill.

Until freedom, we march.