New
Home / Features / Land Day: From Gaza to Sakhnin we are all united with Bil’in

Land Day: From Gaza to Sakhnin we are all united with Bil’in 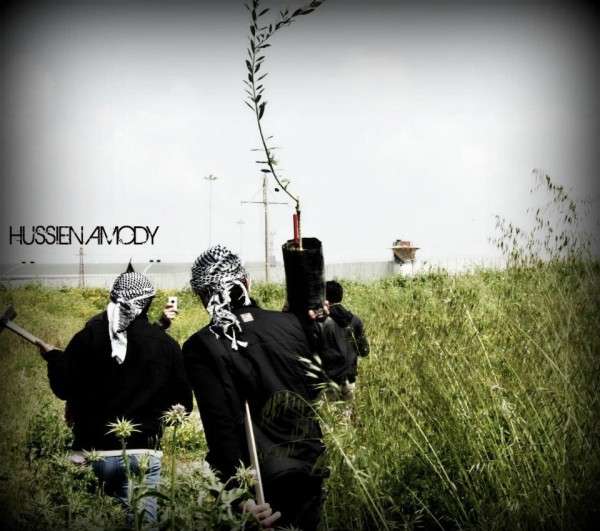 Thirty six years ago on March 30th 1976 demonstrations against the confiscation of Palestinian land by the Israeli government spread throughout Palestine.  Six Palestinians were killed, over a hundred wounded, and hundreds more arrested.  Land day was one of the first large mobilizations of Palestinians with 1948 Palestine.  This year, on Land Day, hundreds of thousands of Palestinians from all over the world will march towards Jerusalem.  Today, in Beit Hanoun, Land Day came early.  The weekly Tuesday demonstration against the occupation and the no go zone was in honor of Land Day and the six martyrs who gave their lives defending their land thirty six years ago.

We gathered on the road in front of the Beit Hanoun Agricultural College in preparation for the march into the no go zone.  There were about 50 of us, the Beit Hanoun Local Initiative, the International Solidarity Movement, other foreign activists, and Gazan activists from all over Gaza.  Palestinian flags flew high, music played over the megaphone, and we unfurled banners in memory of the martyrs of 1976.  Young men carried olive trees, hoes, shovels and water.  We would plant the trees in the no go zone today.  We marched slowly toward the no go zone.

The no go zone has been overgrown with thistles, for some reason the Israeli’s have stopped bulldozing the ground so often.  Perhaps they are satisfied that they grounded most signs that people used to live here, that the no go zone used to be a place of thriving orchards, completely to dust under the treads of their tanks of their bulldozers.  We made our way through the thistles using paths cut by our previous demonstrations in the no go zone.  We made our way to the trench the Israeli’s dug to bisect the no go zone.  The trench is lined with flags from our past demonstrations. Today it is also lined with pictures of Rachel Corrie and Hana Shalabi from last week’s demonstration.

Young men set to work with their hoes. They cleared two areas of thistles, dug holes, and planted young olive saplings.  While the trees were being planted the crowd chanted, “From Gaza to Sakhnin we are all united with Bil’in.” Usually, the chant is from “from Gaza to Jenin we are all united with Bil’in”, but this week Sakhnin was honored for its role in the first Land Day. 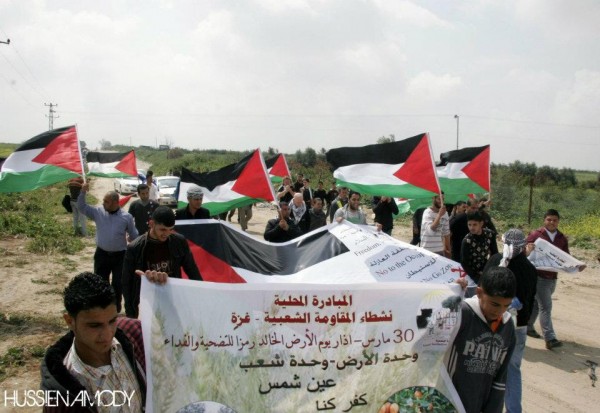 After the trees were planted we set about our second task for the day, erasing the trench which scars the no go zone.  Young men set to work with hoes and shovels filling it in with dirt.  Israeli soldiers appeared on top the concrete tower from which they usually shoot at us.  This time, they did not shoot, they merely watched.

The young men continued to work at filling in the ditch.  Perhaps the soldiers were afraid of shooting, afraid of inspiring even demonstrations on the 30th. Perhaps they realized that to these demonstrators, freedom is more important than life.  The young men worked steadily. Soon a good part of the trench was filled in.  They shouldered their shovels and hoes and we began to walk back towards Beit Hanoun.  We paused at the edge of the no go zone by some giant concrete blocks painted with Palestinian flags, we ate cookies and drank orange juice.  Today, we went to the no go zone and planted olive trees, God willing, on Land Day we will plant olive trees in Al Quds.

Nathan Stuckey is a volunteer with International Solidarity Movement