Nayif Qarmout was killed by an Israeli missile today at 9:30 A.M. He was 14 years old. Five other teenagers with him were injured, Tamer Azzam, 16, Mu’ayyad al-Qanou’, 18, Hani al-Qanou’, 16, Salih Qarmout, 14; and Sa’eed al-Attar, 14. The boys were reportedly playing football in a playground when the missile struck. Nayif was buried today in Jabalia. 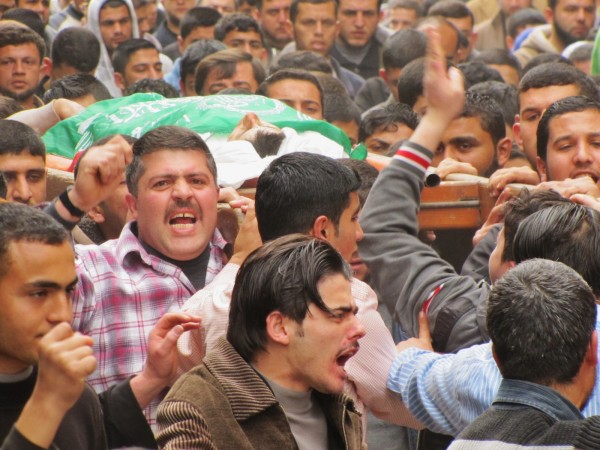 The same mosque that yesterday hosted the funeral of twelve year old Ayoub Useila today was the site of the funeral of Nayif. Hundreds of people gathered for noon prayers before the funeral. The street outside of the mosque was full of people.  After prayers Nayif’s body was brought out, born on the shoulders of his friends and relatives. His face was the only thing visible, it was bloody and swollen. His body was wrapped in white cloth. Around him rose the green flags of Hamas.

This time, we did not set out toward the cemetery near the border.  We went through the heart of Jabalia.  The streets were narrow and crowded.  Cries of “God is great” and “there is no God but God” rang out.  The men raised one arm in the air, one finger extended, there is one God it said.  From the windows of second and third stories people looked down onto the procession, onto the shattered body of Nayif Qarmout.  Nayif Qarmout, who this morning had been playing football with his friends, who had still been alive, was now, a bloody body on a stretcher. 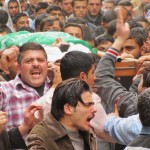 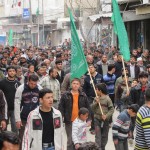 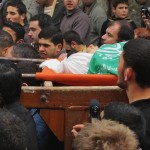 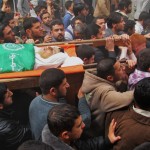 The cemetery was Nayif was buried is an old cemetery.  It is already crowded with graves.  The procession slowed as the men picked their way among the grave, until they found the place where Nayif was to be buried.  The grave was dug.  Nayif was lowered into it and men began to shovel earth over him.  When they were finished there was a human shaped mound of earth.  Even if you did not know what had happened, you would know what this was, the grave of a child.  A young red haired man sat by the grave, he did not cry but the grief was obvious.  Nayif was someone that meant a lot to him.  Nayif was stolen from him by an Israeli missile.