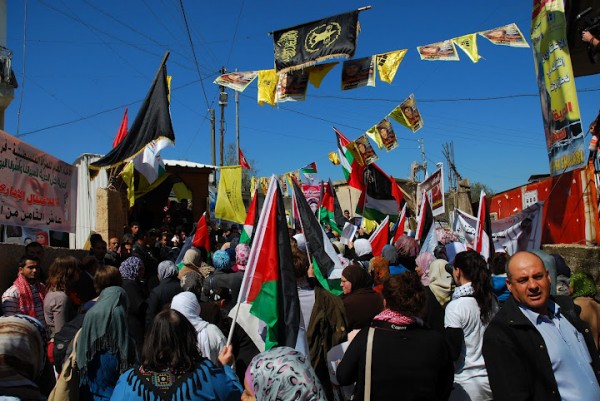 Yesterday, several hundred people traveled from around the West Bank to the village of Bruqin to mark the occasion of International Women’s Day and protest against Israel’s continued imprisonment and confinement of hunger striker Hana Shalabi.

Bruqin is Shalabi’s home village, and the demonstration centered around the Shalabi family home. The demonstration was organized by the Union of Palestinian Women Committees and representatives from the Palestinian Prisoner’s Society and political parties ranging from Islamic Jihad to the DFLP were present.

Hana Shalabi was arrested February 16 and is currently imprisoned under the illegal Israeli practice of administrative detention. She has not been informed of a charge against her, given neither a trial no a sentence, nor has been allowed to see the evidence against her. Shalabi was released from a previous two year long administrative detention term last year as part of the Gilad Shalit deal.

She has refused food for the last 22 days, and has vowed to continue her hunger strike until her release.