“We called him Nassr, but I think his real name was Mahmoud,” says Ahmed while we were on the bus from the Beit Furik municipality building. Outside the bus window, the walls of the little town just outside of Nablus are plastered with freshly printed martyr posters. The picture shows a middle aged man photoshopped between the Dome of the Rock and the Palestinian flag. 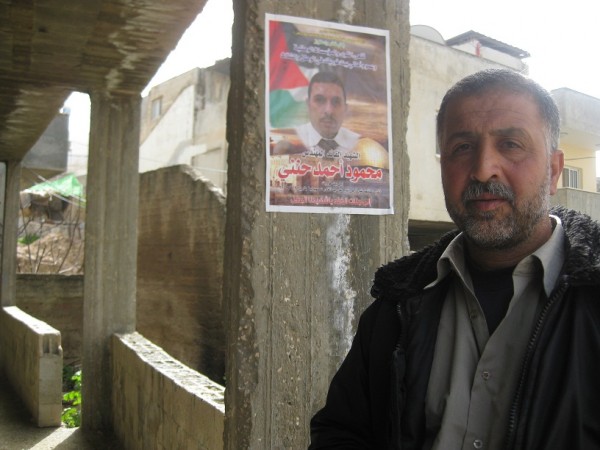 Ali Hannini, the cousin of Mahmoud Hanin who was kiled by Israeli rocket fire.

It has just been a few days since Mahmoud Hanini was killed by an Israeli rocket while in a car in the Gaza Strip.

“He was suspected of being affiliated with a militant group in the West Bank in 2005 and was forced to flee to Jordan and then on to Egypt and Gaza where he worked with the resistance against the occupation,” Ahmed continues.

In the stairwell leading up to the Hanini residence, one of the landings is cluttered up with shoes and a somber song is playing from the apartment. The family is still in mourning. We are shown to the roof where Mahmoud’s cousin, Ali, serves us coffee and dates.

“Things are going to be hard for this family now,” he said.

Mahmoud only had one brother and eleven sisters. It will be economically difficult for them. Mahmoud also had three children in Beit Furik and two daughters in Gaza.

When Mahmoud was killed on Friday, he was in a car with Zuhair al-Qaissi, the leader of the armed wing of the Popular Resistance Committee, the group responsible for the kidnapping of the Israeli soldier, Gilad Shalit.

The body of Mahmoud Hanini will remain in Gaza, and his family will have to face the pain of not being able to visit his grave.

“It would be extremely expensive and difficult for us,” says Ali.

In the midst of military escalation in Gaza and the grief at home, the Hanini family still carry some hope for the future.

“We want to say a message to the people of the outside world: that the only thing we long for is peace. We only resist to win our freedom. This is not an issue of a conflict between religions. The issue is that Israel is occupying our lands in violation of international laws.”

The murder of Mahmoud Hanini, Zuhair al-Qaissi, and their driver set ablaze the region as groups throughout the Gaza strip responded by firing nearly a hundred rockets into Israeli territory. Most of these were intercepted by Israeli air defence, but one Israeli was killed by the rockets. Israel in turn responded with attacks against Gaza that since Friday have taken the lives of dozens of Palestinians.