New
Home / In the Media / Settlers attack demo in Qaryut

Demonstrators in Qaryout attempted to plant olive trees to resist land grab. On the way, they were attacked by settlers and the army. 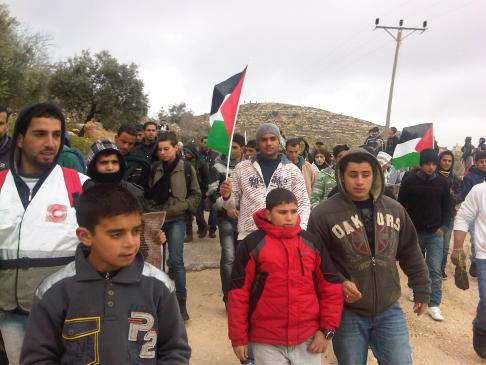 Approximately 100 residents of the Qaryout joined the weekly protest against the occupation this week, aiming to plant olive trees on their lands, as an action against confiscation of lands by neighboring settlements. One of main legal mechanisms used by Israel to expropriate Palestinian land is the Ottoman Land Law of 1858, which was in force on the eve of the occupation. According to this law, if privately owned agricultural land is not cultivated for three years it may be declared as “abandoned property” and seized by the state. 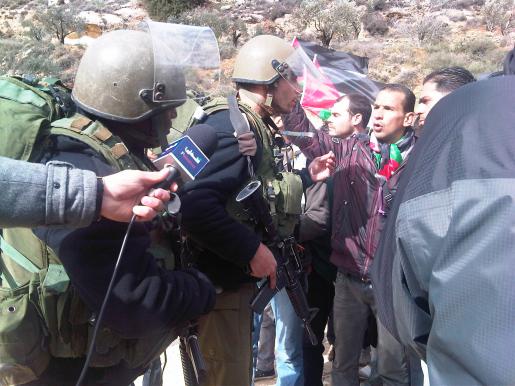 Residents and their supporters marched towards the roadblock, which they have managed to open last week, and which currently remains open. As they were proceeding, settlement private security guards approached the demonstration, shooting live ammunition in the air. The protesters continued marching, finally reaching a line of soldiers. After proceeding some more, the march was effectively trapped in between two groups of settlers – one from the front and one from the back, as well as the army. Nonetheless, they managed to plant a number of trees. As demonstrators were heading back towards the village, settlers “accompanied” them from the hilltop and threw stones directly at protesters. As a result, some clashes erupted between the local youth and the settlers. The army intervened by shooting massive amounts of tear-gas canisters at the protesters. Two injuries were reported.

The village of Qaryout is located in the Northern West Bank, near the city of Nablus. It is home for approximately 2500 residents whose lives have become unbearable due to continuous land confiscations, obstruction of movement and settler violence.