In advance of last week’s regular demonstration in Kufr Qaddoum the Israeli military attempted to prevent it by turning off the electricity supply to the village from 4AM that morning. But it did not deter about 150 Palestinians from the village from marching up the road towards Qadumim. This week, the lights were on, and again the villagers were out in large numbers to make their peaceful protest, with international and Israeli solidarity activists marching alongside them. 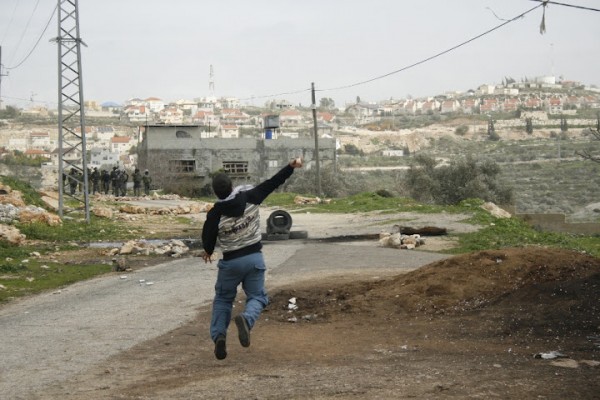 The main focus of the protest is the opening of the road – a direct route that goes through the Qadumim settlement. Since this road was closed to villagers in 2003, they have had to drive or walk much further around the settlement. As well as taking more time and costing more, this road closure may also have caused fatalities – three people have died in ambulances denied permission to take the direct route to hospital in Nablus. There are other issues affecting the village too, including the theft of land by settlers.

Palestinian flags flew in the cold wind as the demonstration made its way through the village towards the line of Israeli soldiers. It was not long before the teargas started with the soldiers shooting it straight at the crowd at chest height. As people ran, several were injured due to being hit by tear gas canisters or from falls – not knowing whether to face the soldiers and watch for the tear gas being shot at them or to turn and run with their backs to it.

Thus began a running battle, with one side armed with tear gas, rubber coated steel bullets and sound bombs and the other merely with their voices and stones from the ground. At one point the soldiers retreated right back to the illegal settlement, and the demonstrators made their way far down the road towards them, burning tyres and flying Palestinian flags. But shouts from lookouts indicated the soldiers were back and there was a sudden rush back into the village as the tear gas started again. This time the Israeli soldiers came right into the village using all the tools at their disposal to disperse the crowd.

At least five people were hit with tear gas canisters or steel coated rubber bullets, including one Israeli solidarity activist.

Afterwards, Murad Shtewi, a member of the organizing committee in Kufr Qaddoum, explained how the whole village is behind this and will not be intimidated by the Israelis.

They have been demonstrating every Friday since July 2011. Since then Israeli forces have raided the village almost every day and night and 11 young men between the ages of 18 and 33 have been arrested – merely for demonstrating.

“But,” he says “we will not stop our demonstrations until we fulfill our goal of opening the road. And we will do more demonstrations if the Israelis try to steal more of our land, as they did last week.”

Veronica is a volunteer with International Solidarity Movement (name has been changed).