Kufr ad-Dik and Burqin march against boars, pollution, and violence by Israelis

Burqin and Kufr Ad-Dik face daily obstructions in justice as nearby illegal Zionist settlements encroach on the livelihood of local Palestinians. The villages are surrounded by several hilltop illegal settlements and industrial sites with polluting factories and an army base.

“This is a microcosm of Palestinian suffering” stated a resident upon the arrival of International Solidarity Movement volunteers.

Burqin and Kufr Ad-Dik are under siege by settlers and soldiers. The villages are situated in Areas B and C as stipulated by the Oslo Agreement and sit dangerously close to the 1948 Green Line. Burqin has approximately 4000 residents which include many refugees from Al Nakba, or the Catastrophe, known to Palestinians when they faced exile from their villages in 1948 at the creation of Israel. 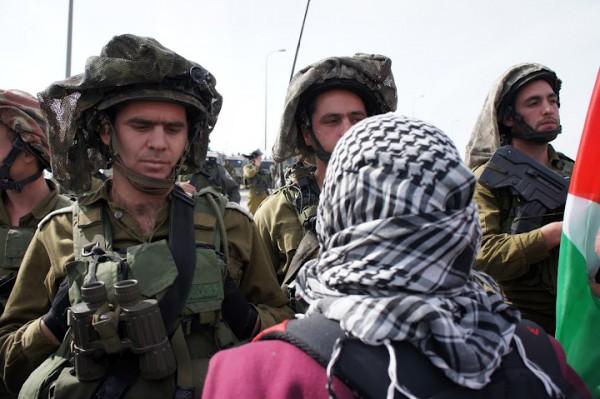 The village relies on small scale agriculture for its existence. The Israelis from the illegal settlements know this and routinely destroy Palestinian crops often by burning olive trees as part of the extremist “Price Tag Campaign.” They have also released wild boars from their settlements which eat Palestinian crops and are very dangerous, especially to the young of the villages. In an act of callousness the settlers destroyed a newly bought piece of farm machinery about two weeks ago. During this attack they also burned a car and unsuccessfully firebombed the local mosque, leaving threatening graffiti that they will be back.

While a local place of worship, graffiti, and vandalism seem like small offenses, one must keep in mind that these are systematically done to pressure the villages into abandoning what is left of their homes.

As with many of the Palestinian villages who have suffered the injustice of having their lands stolen by Israel in order to build illegal settlements, which continue to expand, Burqin and Kufr Ad-Dik are forced to endure regular attacks from the illegal occupants of their land as well as harassment by the Israeli military. The settlers, soldiers and Israeli government, which is benefiting from and funding the existence of these illegal settlements work cooperatively to forcibly remove Palestinians from their land.

There is an industrial estate, situated on top of a hill, which houses several severely polluting factories. These factories could not gain a license to be constructed inside of Israel due to the pollution that will be created, but they were granted permission by the Israeli government to be built within the West Bank illegally under international law. The waste from these factories is channeled in an open sewer through the villages.

Since the factories began polluting there has been a sharp rise in health problems within the village including an anomaly in cancer cases. A German charity volunteered to pay for the sewer to be covered and managed.

Permission to build this cover was flatly denied by the Israelis. The pollution from the factories has severely affected the surrounding land causing trees to die, crops to fail, and the meat from animals grazed on the land cannot be sold due to fear of contamination.

The waste water and solid waste these industries produce,  provide important clues about the type and extent of industrial activity… Clear evidence that Israeli factories operating in the Occupied Territories do not follow pollution prevention measures is provided by the Barqan industrial zone, which houses factories producing aluminum, fiberglass, plastic, electroplating, and military items. Industrial waste water from this zone flows untreated to the nearby valley, damaging agricultural land belonging to the Palestinian villages of Sarta, Kufr Al-Deek, and Burqin, and polluting the groundwater with heavy metals.

Unemployment is now very high in the villages since much of the land has been taken by settlers and the military. To add insult to the pollution inflicted on the villages, the Palestinians are banned from working the factories surrounding them. With more land being taken away every day, unemployment and poverty continue to rise. Yesterday an army order was issued to take another 60 dunums (1000m squared = 1 dunum) for “military purposes.”  Farmers are now collating deeds to their lands in an attempt to argue their case in court.

Burqin has lost over 8000 dunums to the illegal occupation, most of which was stolen in the last 10 years. The land theft is sharply on the increase. The farm land that is left is still extremely dangerous to farm due to settler attacks and the threat of wild boars.

Not satisfied with attacking the food production, the Israelis have destroyed several wells, which are vital to the well-being of the villagers. The illegal settlers have commandeered most of the water supply leaving the Palestinians with critically low access to clean water. A recent study found that the average settler uses 18 times that of one Palestinian villager.

In addition to the destruction of wells several homes have been demolished including a home that the owner worked for 30 years to save enough to build.

Leaving or reentering the villages is high risk as settlers will often throw rocks at Palestinian cars. If the villagers successfully run the gauntlet they then have to pass through harassing Israeli Army checkpoints.

The villages have just started a weekly protest against their oppression in Kufr Ad-Dik. This was met last week with tear gas and steel bullets thinly coated with rubber leaving 10 villagers wounded.

For a recap of this week’s demonstration, check out the following video:

The protest will continue every Friday.