Hebron: At least 10 children arrested by Israeli military in one week

The extreme Golani Unit of the Israeli military is escalating its arrests of Palestinian children in Al Khalil (Hebron), targeting boys between the ages of 12 to15 years old with at least 10 reported cases of child arrests made just in the span of one week. 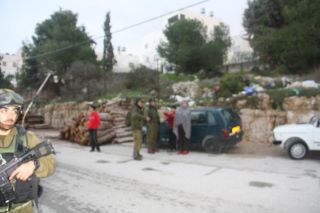 The arrest of Dwaik and Sultan

On February 2, 2012, 12-year old Islam Dwaik and 13-year old Ahsan Sultan were walking near Tel Rumeida. According to the two children, they were on their way to register for English courses. During their walk Israeli military accused the youth of throwing a stone at Israeli soldiers patrolling the area, with 12 soldiers arresting the two boys and walking them through Shuhada Street and into the illegal settlement of Abraham Avino.

Dwaik and Sultan stated that as they were walking, they noticed military was following and “running near them” until they were arrested.

The youth were detained for a total of three hours, which included them being escorted by military to their homes. Once they arrived at their respective households, soldiers threatened that if their children were arrested in the future, that the parents would also be arrested as well.

A local Palestinian stated that as the military paraded the youth into Shuhada street, it was “as if they were making an example of them and their families.”

In another incident on Saturday, February 4th, during a settler tour in the old city of Al Khalil , Israeli military alleged a single stone was thrown towards the heavily armed soldiers while the illegal Israeli settlers and Zionists were returning to their illegal colony. The settler tour is a weekly activity of the Israeli settlers and Zionists, where they take a tour of the Palestinian old city with armed soldiers as escorts, in an attempt to claim heritage, taunt locals, stifle local businesses, and invoke their presence as occupiers.

Volunteers from International Solidarity Movement, Christian Peacemaker Teams (CPT), and The Ecumenical Accompaniment Programme in Palestine and Israel  (EAPPI) were on the scene when six Israeli soldiers claimed the stone was thrown, who then sought out Palestinian youth who were in the area. The soldiers found three boys between the ages of 12 to 15 years old, threatening them and their families with arbitrary arrests. International activists and observers were barred from getting near the detained youth, who were later released.

Another incident was reported by an international volunteer on Monday, February 6th. Volunteers from Temporary International Presence in Hebron witnessed the arrest of two boys near Qordoba school, while soldiers threatened their school principal. 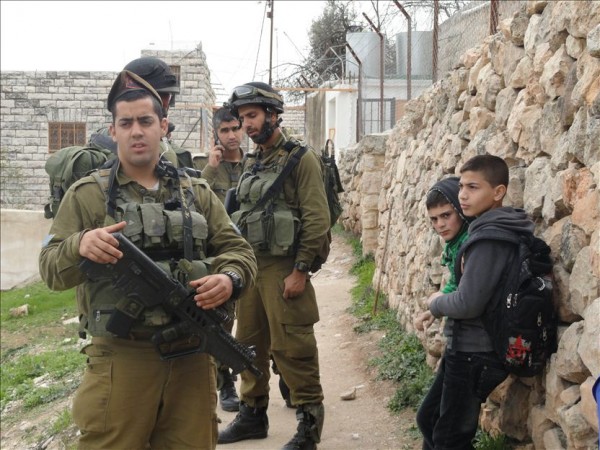 Two 11 year old boys were detained at Qordoba school. Towards the end of our monitoring period this afternoon, as we were leaving the area, the TIPH (Temporary International Presence in Hebron) and I saw 6 soldiers armed with M-16’s run urgently up the hill towards the school. We then heard 6 soldiers shouting violently at the children and heard children screaming and crying.

The three of us ran up the stairs to find the soldiers pulling the boys by their clothes to take them to the police station. The teachers from the school were still on the school grounds and surrounded the children to protect them and attempted to talk to the soldiers. The soldiers yelled at the teachers several times to “go away.” Finally, the principal came out and intervened. The soldiers made the teachers leave and allowed the principal to stay and talk to them on the boys behalf, since she told him the parents were at home and not near the school.

The soldiers were accusing the boys of throwing stones at the Israeli settlement (Beit Hadassah Settlement) across the street and down the steep hill from the school. The principal explained that the boys were playing and started to fight with each other and did not intentionally throw stones at anyone. TIPH said while they had been standing near the school, they only saw the boys playing. They did not see anyone throw a stone. The principal pleaded that the boys not be arrested.

The captain for these soldiers, who was negotiating with the principal of the school, threatened her by saying, “Next time if stones are thrown at the Jewish people, I will take the nice little children to the police and I will make a big (something inaudible stated in Hebrew or Arabic) at your school.”

He then told the principal and the students they were free to go.

After the incident,  TIPH and I talked to the principal. The children who were involved and another student who had been playing with them were crying hysterically and were visibly traumatized by this incident.

In October 2011 Qordoba school was the scene of Israeli violence against school children, as soldiers obstructed access to the school and assaulted male and female students as they demonstrated for their right to education.

Arrests were also made on February 9th after violent incursions by the Israeli military. The soldiers arrested three youth, whose ages range between 14 and 15 years old. According to WAFA News Agency, the arrests were made following the use of tear gas and sound bombs to raid Palestinian homes.

Palestinian youth have been manipulated through military arrests, according to the Defense for Children International, which launched its  current campaign against such treatment in 2001. According to DCI children are arrested and used to incriminate other Palestinians through typically illegal or forged testifying, applying pressure to the communities of arrested youth to create subservience and fear, and to set an example out of those politically active, enticing entire communities to become fearful of exercising freedom of speech and assembly.  And in some cases, youth are arrested and subdued into becoming informants for the Israeli military.

According to the Palestinian Information Center, a total of 3,200 Palestinians were arrested by Israel in 2011 alone, 383 of those being children. Approximately 350 Palestinian youth are currently imprisoned by Israel. The issue of administrative detention is under fire as Khader Adnan continues to withhold food consumption in an act of civil disobedience against Israeli arbitrary arrests and extensions of its illegal administrative detentions. Yet to further Israel’s lack of regard for international law, the rights of defenseless children are being violated to continue Israel’s illegal and violent occupation as the Golani unit continues to target youth in Al Khalil.

By manipulating arbitrary child arrests as a means to pressure the Palestinian community, Israel stands in violation of the UN Convention on the Rights of the Child, to which it is a signatory.

Satu Gustfasson is a volunteer with International Solidarity Movement (name has been changed).