New
Home / In the Media / Despite the announcement of a deal limiting Khader Adnan’s detention, Addameer reiterates its urgent concern for his health

Despite the announcement of a deal limiting Khader Adnan’s detention, Addameer reiterates its urgent concern for his health

*At approximately 7:50 PM local time, it was confirmed by Ran Cohen, Executive Director of Physicans for Human Rights-Israel, that Khader Adnan has ended his hunger strike.

Khader Adnan’s hearing at the Israeli High Court was cancelled today, 21 February 2012, only minutes before the hearing was to take place. On Khader’s 66th day of hunger strike in protest of his administrative detention and inhuman and degrading treatment by the Israeli authorities, one of Khader’s lawyers negotiated a deal with the Israeli military prosecutor that Khader will be released on 17 April instead of 8 May and that his administrative detention order will not be renewed. Addameer lawyer Samer Sam’an is actively working to gain permission to visit Khader to confirm whether or not he will continue with his hunger strike. 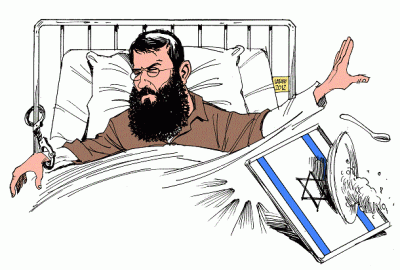 Addameer maintains that the fact that Israeli officials negotiated the duration of his detention, in addition to agreeing to an early release, reveals that there were no grounds for his administrative detention in the first place. His administrative detention order, as is the case with all other administrative detainees, is based on the alleged threat he poses to the “security of the State of Israel.” However, if Israeli officials agree that he will not be a threat on 17 April, as clear from today’s deal, he surely does not pose any threat today and his case provides further proof of Israel’s policy of arbitrary detention. Addameer reiterates its call for his immediate and unconditional release and the release of the 308 other administrative detainees.

Addameer’s main concern remains Khader’s health, in critical condition after over two months of hunger strike.Whether or not Khader continues his hunger strike, he must receive proper arrangements for observing his health condition, which will likely now have irreversible consequences. If he does decide to end his hunger strike, the potential complications from such a protracted hunger strike will require urgent and trusted care, which can only be provided if he is released.

Addameer continues to salute Khader Adnan for his incredible steadfastness in challenging Israel’s policy of holding Palestinians in detention without charge or trial, which is in violation of international law. Addameer further thanks all individuals and institutions who have chosen not to ignore the basic human rights violations being committed against Palestinian prisoners on a daily basis and who have expressed their explicit support for Khader and his fellow prisoners. The date set for Khader’s release, 17 April, ironically falls on Palestinian Prisoners’ Day, which will serve as a reminder of the thousands of other Palestinian political prisoners who remain in Israeli detention.