Walking down Shuhada Street in occupied Hebron (al-Khalil) is an eerie experience even during peek commercial hours in the rest of the city. Nearly empty streets are framed by rows of closed Palestinian shops, doors welded shut under Israeli military orders. Armed religious settlers walk freely through the streets, while Palestinian vehicular and pedestrian access is severely restricted. Signs in English and Hebrew assert a purely Jewish heritage in Hebron, telling a narrative that simultaneously erases the Palestinian history and rightful ownership, in an attempt to forge Israel’s illegal settlement in city center. 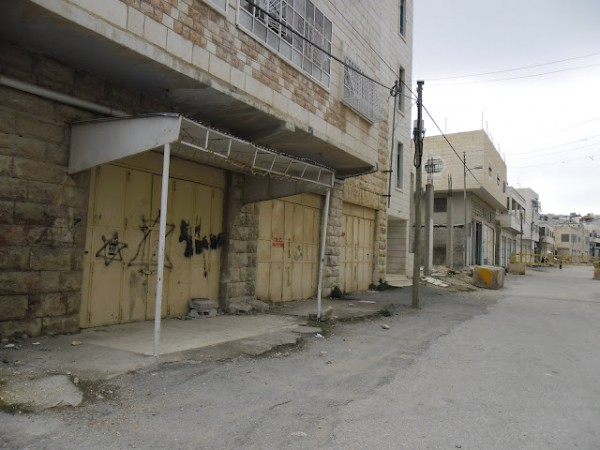 Palestinian shops have been forcefully closed by Israeli military due to illegal settler presence in Hebron.

The sight of closed shops is also common in the old city, as is the sound of young Palestinian children asking five shekels for the small tourist items they are selling from small plastic bags; perhaps beaded bracelets the color of the Palestinian flag or packs of chewing gum. Some are not selling anything but ask passersby to “give me one shekel.” Palestinians are a proud people, so the occurrence of begging, especially in the economic center of the southern West Bank, illustrates the extent of the economic devastation caused by Israeli policies.

Hebron is the largest city in the West Bank with a population of approximately 170,000 people. Known for its limestone, shoes, leather, dairy products, and glass blowing industry, Hebron is responsible for around one third of the West Bank’s GDP. Despite its reputation as a commercial hub, the city center of Hebron has suffered severe economic consequences since the closing of its main commercial artery, Shuhada Street in 1994. The closure followed the Ibrahimi Mosque massacre, when a far-right settler from the nearby illegal settlement of Kiryat Arba opened fire on a group of Palestinian Muslims at prayer, killing 29. 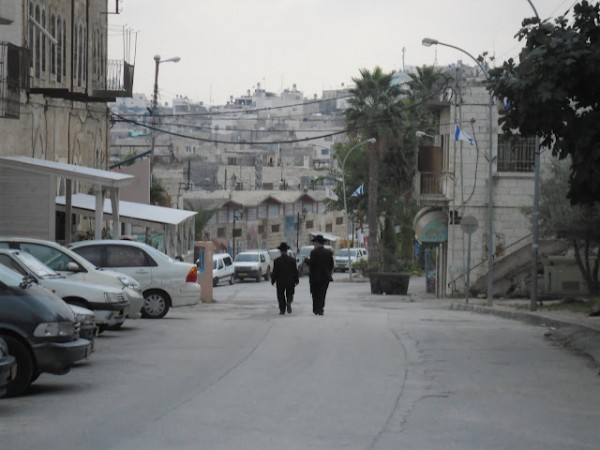 Palestinian movement and economic activity is severely restricted in this area under an Israeli regime based on the “separation principle” – a policy of legal and physical separation for the benefit of the Israeli settlers at the expense of the Palestinian majority. These policies include the imposition of a number of permanent and temporary checkpoints, and the creation of a strip of road in the city center on which the movement of Palestinian vehicles is forbidden. Along Shuhada street Palestinian pedestrian access is forbidden as well. The closing of Shuhahda street is therefore a microcosm of a larger Israeli policy. 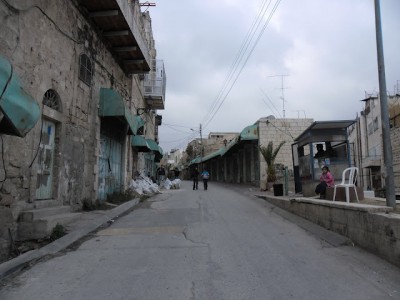 The economic consequences of closure have been devastating. A 2011 report by the United Nations Office for the Co-ordination of Humanitarian Affairs (OCHA) estimated that more than 1,000 Palestinian homes in the city center had been vacated and over 1,800 commercial businesses shut down. According to a 2009 study by the International Committee of the Red Cross (ICRC), 77 percent of the Palestinians in Hebron’s Old City live below the poverty line. Though many shops were closed by military orders, a significant number have closed because the Israeli separation regime makes economic activity impossible.

Nawal Slemiah and her sister Leihla run a shop in the old city called the “Women in Hebron Cooperative” selling keffiyehs, and hand-embroidered dresses and bags made by local women from nearby villages to a dwindling number of foreign visitors. Though the store has managed to stay open despite crippling Israeli policies, being a shop-owner in the old city proves extremely difficult. Leihla points out that her customers have only one route open to them to reach her store, and must pass through checkpoints in order to shop there. Last year the military told her she must close her shop in 5 minutes for “security” reasons or she would be arrested. During the annual campaign to open Shuhada street, the Israeli military closed 3 shops, and threatened to close all shops near Bab al Baladia, the opening of the old city market. “If you support the demonstrations” she says, “they will close your shop.” 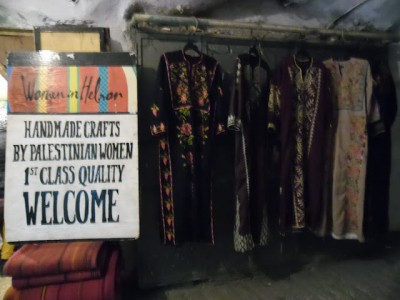 As the 2012 Open Shuhada Street campaign begins, it is important to remember the fight to re-open Shuhada is not about one street, but a larger Israeli policy of separation and the collective economic punishment of the residents of H2. It is about the right to live, work and move freely in the city center, basic human rights that have been routinely denied to Palestinians.

Paige L. is a volunteer with International Solidarity Movement (name has been changed).