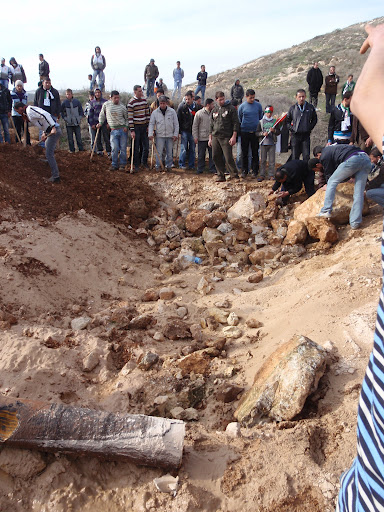 Hundreds of peaceful demonstrators confronted heavily armed Israeli soldiers this Friday, February 3rd,  at a new protest in the village of Qaryut, planting nearly one hundred trees and partially demolishing the roadblock that has obstructed access to the highway since the First Intifada.

Although organizers were prepared for military violence, the protest remained peaceful until the end, and demonstrators marched home triumphantly with a promise from the military to remove the roadblock with a bulldozer, which they did later the same day. While the villagers celebrated this as a victory, Qaryut’s people continue to struggle for control of their lands and recognition of their rights. As of the publishing date, it is uncertain what will be the nature of future protests.

Although Qaryut villagers annually plant trees on their lands, a recent history of settler violence and military intervention drew the Qaryut Youth and Village Councils, together with Stop the Wall Campaign, to organizing a confrontational but peaceful demonstration.
Beginning after Friday prayers, villagers of all ages met with Israeli, international, and other Palestinian supporters at the village center before parading several kilometers down the village’s once- main road towards Highway 60.

With children holding banners and Red Crescent volunteers and solidarity activists in the front, some 400 demonstrators marched down the valley road—above them Israel soldiers, military jeeps, and several counter-protestors thought to be from the hilltop illegal settlements nearby. As protesters climbed over the bulldozed roadblock of dirt and rocks, they were greeted on their land by several dozen heavily armed soldiers in riot gear and jeeps armed with cannons for firing multiple volleys of tear gas canisters. When the crowd did not stop, soldiers closed in on the front but did not fire—and organizers entered into dialogue with commanders, explaining that it was a non-violent protest and were demanding access to their land. 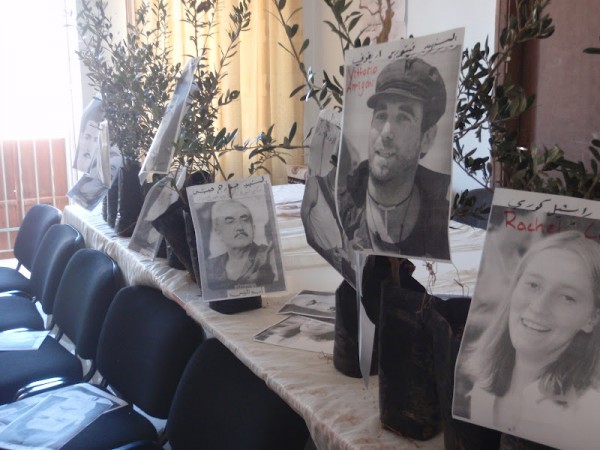 When all the trees were planted and much, but not all, of the barricade demolished, the Israeli commander promised to finish the job with a bulldozer that afternoon if the crowd would withdraw. Though demonstrators agreed, many expressed doubt that the commander would follow through—and organizers began preparations for the next demonstration, expecting they would have to open it themselves. Counter-protestors were also surprised with the outcome; one conservative blogger “YMedad” of Shilo wrote prematurely that Ma’an’s report was mistaken–insisting “when I left, the dirt roadblock was still in place.”

For many participants, one of the most remarkable aspects of the demonstration was an overwhelming sense of jubilant defiance. Before the demonstration, participants expressed concern about the potential for military violence, citing similarly peaceful protests in villages being brutally broken up. Yazan Azem, like many others, could scarcely contain his excitement to go work his community’s land, even though he fully expected a violent response.

Another said, “We are defined by the land. When we come here we feel human. Zaytun [olive] is us. We are deeply rooted.”

During the demonstration, protesters’ passion was palpable in a way unique to people finding their voice. Kheer Abdul Kader, a middle-aged man who claimed to have been arrested ten times for crossing the Apartheid Wall, started by saying “talk means nothing” but, clearly excited to be present, continued, “I’m not saying there should not be the ’48 [Israel inside the 1948 boundaries]. But they should not be here. They do not have permission, like me…Why are the settlers coming here to my homeland, when I cannot be there? I just want to work on my land and do not want to go there.”

After the demonstration, the mood became celebratory—according to peace activist Arafat Mahmod, a double victory because they completed most of what they wanted to do and because “nobody got hurt.” Walking back towards the village, protestors sang songs and chanted “ash`ab yureed tahrir falasteen” (“the people demand the freeing of Palestine”), borrowed from the ongoing Egyptian revolution of Arab Spring fame.

The problems faced by Qaryut, however, are far from resolved.

Located between Ramallah and Nablus (Northern Palestine), Qaryut has long been cut off from the main arterial and its agricultural lifeblood by seven settlements, military harassment, and a earthen roadblock constructed in 2002. The settlements, the largest of which are Eli, Shilo, and Hayovel, occupy 78% of the pre-1976 village’s lands. Settlers and the Israeli government legitimize this using the Oslo Interim Agreement (which gives them military and administrative control) and the antiquated Ottoman ‘absentee property law’ (which allows the state to confiscate it under a variety of pretexts.) This land theft has had far-reaching effects for the village whose people rely on olive, almond, and other harvests for subsistence.

To make matters worse, the United Nations have documented that settlers have joined the harrassment, regularly destroying new generations of trees and sometimes attacking villagers, including children. A  young man from the village, Hasan Abdilatef, corroborated this as the norm:

“Most of the time the soldiers come and pull the [olive trees] up. But we keep coming. Maybe two or three [trees] are still up after three years.”

The blocked road, in turn, has until now severely delayed transportation of people, movement of goods, and other necessary services—typically adding on 30 minutes for the alternate route. For medical emergencies, villagers had to call two ambulances and hand off patients across the barricade. Waste disposal also has been an issue, as villagers report that access to the city dump has been barred to them—soldiers claiming there are settlers living in the area. Instead the dump has been moved to the one other accessible area, along their once-main road and the march-route—where it is burnt. Walking back to the village, another young resident of Qaryut, said that he considers this as a  kind of bio-warfare: forcing the village to improperly dispose of its own waste in toxic ways. “There is no one there,” he said; This is another way of making us leave.”

With one of their main demands met,  it is unknown what form future protests will take or whether other land and road restrictions will be loosened. Although the Israeli commander was unavailable for comment, one Israeli soldier (who did not give his name) denied that the roadblock had been maintained for political reasons, instead claiming it was there “for safety [because] it is a difficult turn [onto Highway 60].”

Forcible relocation of a population, attacks on civilians, and intentionally destroying a people’s means of sustenance are all illegal under international law.