New
Home / Gaza / 5 Palestinian fishermen arrested by Israeli Navy, one of them a 13 year old boy

5 Palestinian fishermen arrested by Israeli Navy, one of them a 13 year old boy

In the past few days five Gazan fishermen have been arrested by the Israeli Navy off the north coast of Gaza. 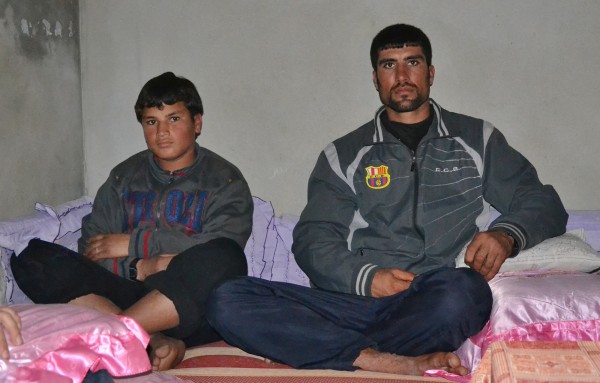 Last night we visited the family of Adham and Mohammed Abu Ryada in Beach Camp, Gaza City. Gaza is without power, they welcomed us in a room lit only by candlelight. Their father started telling us their story.

It was 7 PM on Sunday evening when the two boys were gathering their nets from the sea to sail home. A strong wind had pushed the boat over three nautical miles from the coast.

The Israeli Navy came close to their boat and started shooting.

They tried to escape but they couldn’t.

The Israeli soldiers, as they usually do, asked them to undress, to dive into the water and come on board the navy ship.

Once they were on the ship, the soldiers blindfolded them and tied their hands. They could not see anything until they reached the port of Ashdod in Israel, at around 10 or 11 PM.

The soldiers led them into a room where they remained for 30 minutes. Then the soldiers checked their bodies with an electronic device and questioned them.

During interrogation, they asked them questions about the police in the port of Gaza and to “collaborate” with Israel. They also asked if their neighbors were involved in activities against Israel. Adham said he did not know anything.

After the interrogation, the soldiers took them on a bus to a crossing point unknown to them. After an hour and a half they were put on another bus and the soldiers left them at Erez to walk home.

The two brothers slept outside the gate.

Their clothes were thin, they were cold, Adham tried to cover his little brother.

The soldiers on the ship had given them only a couple of t-shirts of very thin cloth.

They did not know which way to go. So they slept till 6.00 AM, and then, in the daylight, they walked to the Palestinian security office. Finally, Adham could contact one of his brothers who came to pick them up.

His young brother, Mohammed, sits with his eyes wide open. He’s telling us that Israeli soldiers asked him, trying to make him afraid, saying, “What will your father tell you when you return without the boat?”

Mohammed says he doesn’t want to work as a fisherman anymore.

“After my experience, I do not want to be a fisherman, I’m afraid. It’s the first time I saw something like that; I will not be a fisherman.”

He has been fishing with his brothers since he was six years old. Mohammed shows a small wound on his left leg, he was injured while climbing onto the Israeli naval vessel.

His father says, “We can’t do anything. We can no longer work. Our life has stopped.”

Eighteen people relied on that boat. The soldiers took everything, nets and fish.

The soldiers told them, “We will call you to return your boat.” But they know that it will never happen.

“We want our nets back, we want to go on fishing and we would like them to let us live,” adds their father.

Yesterday we went to Beit Lahia to visit the family of the two other fishermen, arrested on Monday morning, while fishing in the waters north of Gaza. 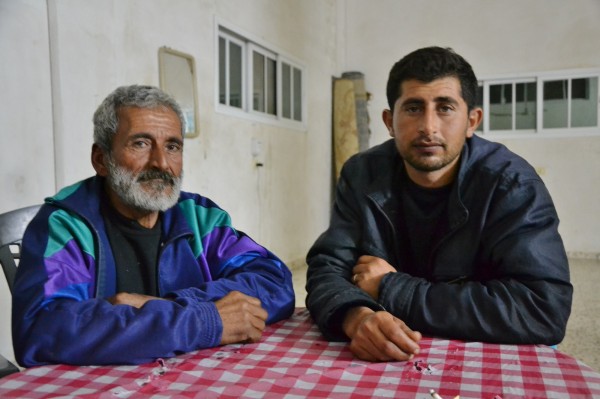 Jamal Ramadan Al Sultan is a 58 year old man. His eyes are intensely expressive. With him is also another fisherman arrested on Tuesday morning, Ahmed Mohammed Zayed, 27 years.

In spite of the veil of sadness covering their eyes, they tell us their story with a sense of humor, their strength.

Ahmed starts sharing with us his experience. He was alone on his rowing boat.

He was arrested on Tuesday morning at 6.00 AM. He was collecting his nets on his boat before coming home. An Israeli naval ship approached the vessel and asked him to stop. He tried to escape but the Israeli soldiers started shooting. They hit two floats for his net on his boat. Ahmed stopped.

They asked him to undress and jump into the water. Ahmed refused to jump in the water because he cannot swim well. The soldiers started firing again. He was forced to jump in the water and they threw him a life preserver. Once on the ship, the soldiers tied his hands and blindfolded him. They started moving slowly toward Ashdod. He felt pain in his wrists because they had been handcuffed very tightly. He asked the soldiers to loosen the handcuffs and take the blindfold off. They reached the port of Ashdod and took him into a room where he remained for 30 minutes. Then, they checked his hands with an electronic device and checked his blood pressure. Ahmed was then questioned.

The first question was about his family, the number and names of his brothers. Ahmed forgot to tell the name of the last brother, who was born recently. The soldiers then started accusing him to be a liar, “You’re a liar, what about Youssef? He’s a month old!”

Ahmed replied: “No, he’s two months old.” Then they asked information about his district and the harbor police. One of the people who was questioning him asked, “Do you want me to tell you things?” Implying they already knew everything to intimidate him, those who questioned him already knew all about his family.

Then Ahmed replied: “Why are you asking me if you already know everything?”

“Because I want to know if you are a liar or not,” the interrogator answered.

Then they showed him a large map and started questioning about some areas in Gaza.

They also asked questions about a water treatment plant. Ahmed told them, “That’s a waterworks.”

“No, it’s a waste facility,” they replied.

They continued asking information about the port police in Soudania and about the port office in Gaza. Then, they pointed on the map to the area where he lives. One of the people questioning him pointed to his brother’s shop.

They told him, “Where do you want to go?” and they showed him the spot where his car was parked. Then they asked him if he wanted to go to an area called Birlnaaja, Ahmed replied “I do not know that area.”

Ahmed gave him the number of the phone he had lost. Then, the person who was questioning him called a soldier to take him away and put a blindfold on him. Ahmed said he could not keep the blindfold on because he suffers from an eye problem. The soldier answered, “These are the orders, but I will not tie it too tightly,” then he added “Take care of your wife and your children” and asked Ahmed to become “friends.”

To become “friends” means to provide them with information, to become “collaborators” with Israel. Ahmed said “No, I do not want that”.

He asked him if he was happy.

Ahmed replied, “If you release me now and I lose the boat, I will still be happy without your friendship.”

The person who was questioning then asked him to take a taunting message to the Internal Security of Hamas: “You cannot work with computers now, because you have no electricity”.

Then the soldiers led Ahmed in the same room where he was before. Ahmed told them he was not feeling well. A soldier gave him some mint to drink, then the soldier left Ahmed alone for an hour. Suddenly two men entered the room and asked him to get up. They grabbed him violently and tied his legs with manacles. They asked him to walk with them to the bus. Ahmed could not get on the bus, because his legs were manacled. “I cannot get on” he said. The soldiers replied, “You must get on.” Ahmed was forced to get on the buy by crawling on his knees. On the bus, the soldiers told him to fasten his seatbelt. “I cannot,” replied Ahmed, “my hands are tied.” A soldier fastened his seat belt. Once arrived at Erez, the soldiers delivered Ahmed to a person in a civilian uniform who started making fun of him. “How was the fish today?”, Ahmed replied “You took my boat, now I will go home to sleep with my family.”

The soldiers gave him the papers stating the limit of three miles in the waters of Gaza and the limit at the northern border with Ashdod, telling him to deliver those papers to the other fishermen. At the exit gate they told him to walk looking straight ahead “If you look away we’ll shoot you.”

Then Ahmed began to run. He met some Palestinians and walked with them up to the Palestinian security office. Then he went to the internal security for questioning. After questioning he returned home.

We ask him if he wants to send a message to the international community.

“I ask you to support us to get the boats back. Our life has stopped because it depends on that boat. And I ask for support for the Palestinians every day.”

It is the fourth time he was stopped by Israeli soldiers, “I cannot count how much pain I have received from Israel.” He has worked as a fisherman since he was 13 years old. “This is my work. I will continue to work in the sea,” concludes Ahmed.

Finally, Jamal, who was arrested on Monday morning, told us his experience.

Jamal was on a rowing boat with his son, they had the same experience as other fishermen, Israeli soldiers stopped them, asked them to jump into the water and took them to Ashdod. They showed them a map, this time not on paper, but on a computer screen and asked for information. Jamal told us that they offered him drinks and medicines, but he refused, he would not swallow anything he was offered.

Jamal and his son stood 30 minutes in a room, then, they were interrogated.

Then the soldiers took them to Erez where they were subjected to another interrogation. The interrogator asked him about their family and how many sons he had.

Jamal answered that he has 8 sons. The interrogator said him “No, you have 9 sons”. Jamal replied: “No, you killed my son during Cast Lead in a school”.

They started to tell him that his son was a fighter.

Jamal’s son was 27 years old when he was killed with 3 others young men in UNRWA school targeted by a missile, three years ago during Cast Lead.

During Cast Lead a lot of people took refuge in the schools to be safe, but Israel bombed the schools indiscriminately.

The interrogators asked him for information about the Palestinian resistance and the training camps.

Jamal answered he didn’t know. “We know”, they answered him and they asked him about the places from which the resistance fires missiles. “I don’t know”, answered Jamal.

They asked him if he wanted to eat, but he refused. They offered him their “friendship”: “If you have any information you will be happy”. They took him to the gate, he went to the Palestinian security office and he came back home. His son was still at the Hamas Internal Security office to be interrogated.

We asked Jamal if he felt like to send a message to the outside world. He stated

All the fishermen suffer from this situation, we face all these troubles in the sea, we try to feed our families, we try to survive. The international community must support the Palestinian case to stop this siege, because we are under siege in the sea, in the air, and on our land.