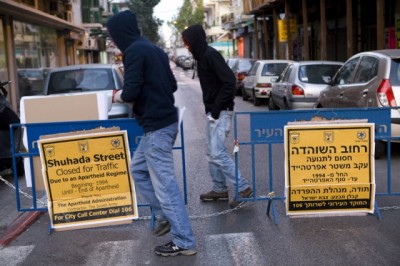 This year, Palestinian activists in Hebron are planning a week of activities to commemorate the Baruch Goldstein Massacre and demand the opening of Shuhada Street. The planned activities in Hebron are as follows:

Monday :       20/02/2012
Photo Exhibition about the Ibrahim Mosque Massacre and Non-violent Resistance in Palestine

As we have done for the past few years, we urge all people who are against Israeli Apartheid in Hebron to organize solidarity actions on February 25, 2012.

Below is a list of suggested solidarity actions that we hope you will consider.

2. Presentations about Apartheid in Hebron

4. Twitter: Use this hashtag #OpenShuhadaSt to spread the word and educate the masses about Hebron.  This is especially important during the week of actions.

6. Letter-writing and Petitions to the Israeli Ambassador and elected officials in your country asking them to intervene

7.Write letters to the Palestinian Families in Hebron to show solidarity

8.Close roads to show the public the effects of closing the main road in Hebron.

9.Visit Hebron to gain an understanding of the situation and the daily suffering of the people living there.

10. Any other non-violent activity you feel supports the cause, be as creative as possible!!

Please reply to let us know if/how you plan to participate!