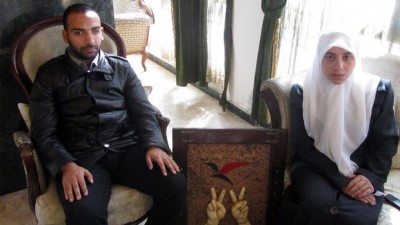 “This is the life of Palestinian people,” Obada Saed Bilal said one recent morning. “If I hadn’t been detained, I would have been wounded or martyred. I was in detention for over nine years, but I still resist. My marriage and university studies are my ways to keep fighting now.”

Obada and his wife, Nili Zahi Safad, sat in the lobby of the Commodore Gaza Hotel. The Ministry of Detainees in Gaza has temporarily housed them there, along with a number of other former political prisoners who, like Bilal, were freed in the prisoner exchange on 18 October 2011.

Safad moved to Gaza shortly after her husband’s arrival. They had been married for only twenty days when his arrest separated them on 16 April 2002.

“I was brutally beaten for two hours,” Bilal said, recalling the 1am military raid in the West Bank village of Aghwar in which he was detained. “Then I was taken to the Petach Tikva detention center in Tel Aviv. They interrogated me for ninety days. This was my most difficult time as a prisoner. I was kept in isolation, handcuffed and blindfolded, and interrogated for about twelve hours every day.”

After his interrogation, the Israeli authorities sent Bilal to Ashkelon, where a military court sentenced him to 26 years.

“I was detained at a checkpoint,” she said of her arrest on 11 November 2009. “I was returning from Hebron to Nablus, when they arrested me and sent me to detention. They kept me in isolation for ninety days before transferring me to the HaSharon prison for women. About 17 women were detained at HaSharon then; now there are only seven.

“While being interrogated, women are treated exactly like the men,” she added. “We were deprived of food, sleep and even access to the toilet. They shouted insults at us. I was kept handcuffed and blindfolded. Once they chained my hands to the ceiling for four days.”

Bilal and Safad told The Electronic Intifada that their conditions barely improved after they were transferred to prisons following their ninety-day interrogation periods.

“Our daily life was harsh and difficult,” Bilal said. “Our basic human and medical needs were routinely denied. The jailers treated us poorly, the food was awful and we were routinely denied any contact with our families. I wasn’t able to see mine for three years. We were kept handcuffed for ten hours a day, and only given one hour for recreation. Sometimes they punished us by denying even this.”

The Israeli authorities seemed determined to prevent contact with family members inside the prison. “Once I met my two brothers in prison. But when the jailers learned that we were brothers, they separated us,” Bilal said. “And when my wife was arrested, I asked to be placed with her, but the prison administration refused.” Their reunion seemed less likely after Safad completed her sentence and was released on 10 July 2011.

The authorities also tried to prevent inmates from forming any bonds with each other. “They transferred us among prisons only to confuse us. As soon as we made new friends, they would transfer us again. This was psychological punishment,” Bilal explained.

He had a problem with his eyesight before his arrest, and it became worse in prison. “But they refused to treat it,” he said. “It deteriorated until I couldn’t see at all.”

The International Middle East Media Center reported in late November that there were at least forty persons living with disabilities, such as Bilal’s blindness, among the prisoner population. Many prisoners have died due to systematic medical negligence and torture (“Forty disabled Palestinians are imprisoned by Israel,” 30 November 2011).

Today, Bilal and Safad’s lives go on in a new city, far from their families and community in Nablus.

Bilal, an An-Najah National University public relations student when arrested, has returned to his studies, this time in politics and religion at the Islamic University of Gaza. He and Safad continue supporting Bilal’s brothers, Moad and Othman, both current political prisoners.

The couple also marked the end of their separation by renewing their marriage vows. “We held another wedding party after I was released and my wife came to Gaza, to celebrate our life and resistance,” Bilal said. “This is our message to the world, that we must celebrate our struggle and keep fighting.”

Joe Catron is an international solidarity activist and boycott, divestment, and sanctions organizer in Gaza. He blogs at joecatron.wordpress.com and tweets at @jncatron.