New
Home / In the Media / To exist is to resist! Rebuilding homes in Anata

To exist is to resist! Rebuilding homes in Anata 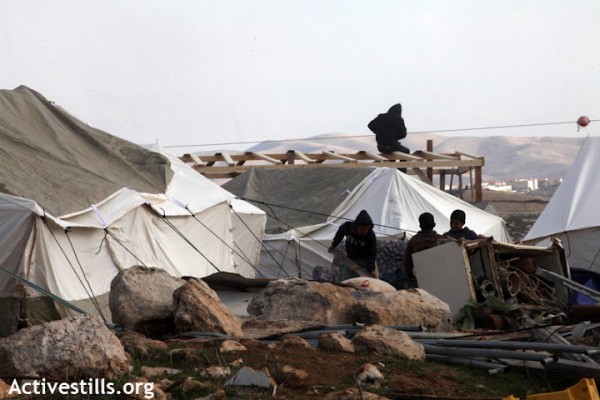 How do you continue your life after your home had been demolished? How do you cope with the uncertainty of having a roof for your children and protect them from the cold and rain?

On the 23rd January, 6 homes of the community of the Arab al Jahalin, members of the biggest Bedouin tribe in the West Bank, in Anata were demolished in the middle of the night leaving more than 50 people homeless, many of them children. More demolitions are coming: more than 2,000 members of the Arab al Jahalin, who are scattered mostly around Jerusalem are threatened with forced displacement; one of the locations “proposed” by the Israeli authorities is a garbage dump in El Azzariya.

I visited the community two days after the demolition. The children and women were helplessly sitting around. The personal belongings were all scattered around. The men were trying to pick up the pieces of their homes and lives and already were starting building up a new home out of woods and tins. Some tents were provided by the International Committee of the Red Cross (ICRC) but there is not enough to protect from the rain and cold.

The next day I went back. All the people were busy cleaning and rebuilding. Some volunteers- Palestinians, Israelis and internationals were here helping out. People were not sitting around being miserable, they were up in their feet, rebuilding. This is what Palestinians do, whatever Israel destroys, they get up on their feet and rebuild. Children were also participating, moving the stones around, the women were also cleaning and sorting out the furniture. One home was just finished. More woods structure arrived and we started to erect a second house after a beautiful lunch. Smiles were seen all around, children laughed with the volunteers. A broken bike was still being used by the children, they were carrying it around but could not get on it. I guess they were just pretending that they did not notice it was broken. But can they also pretend that their homes were not demolished?

These children were just so amazing. Today it is raining and I cannot stop thinking about them. I know they are strong, I know they pick up the piece and just go on living, not thinking one minute of leaving despite the fact that they know the Israelis will come back.

“To exist is to resist”, and the reverse is also so true: “to resist is to exist”. For sure they do: by refusing to be intimidated and thrown into a garbage dump, by rebuilding and not giving up one inch, they become part of the invisible unarmed and resolute army that is standing up against the oppressive regime that is attempting to silently ethnically cleansed them.

They are strong but they should not be alone in their fight. Direct help is needed to ensure they rebuild what they need, more political pressure and actions are also needed to raise awareness about forced displacement. If the international community do not act now, this slow ethnic cleansing is likely to increase in the next months.