Friday night, Israeli soldiers at Checkpoints 56 and Gilbert in the town of Al Khalil (Hebron) detained Palestinian and International Solidarity Movement activists for a total of five hours for unexplained reasons. The detainees, a mix of activists and community members, were held for hours out on a cold night while groups of settlers and military squads arrived to heckle, shout, curse and point their guns. The soldiers of the recently arrived Golani Brigade, one of whom, a checkpoint commander, said their reasons where because “because [he] said so.”

The detentions occurred one after another and involved activists and community members being sent back and forth between checkpoints.  Each time they thought themselves free to go they were again detained a short walk away.  In each round of detentions, the problems started with arbitrary detention of a Palestinian, after which ISM and Youth Against Settlements activist observers were asked to show passports and detained by Israeli soldiers without any pretense of justification. 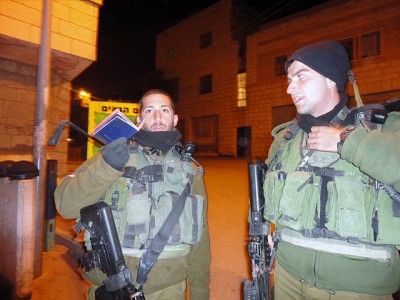 The first person held, a man returning home to the Palestinian-controlled “H1” zone of Khalil, had been in military custody two and a half hours prior to the arrival of solidarity activists. According to the soldiers, this was because the man lacked identification, but they were unwilling to accept his personal information (including passport number) and did not offer any other options. The man was finally released when the soldiers’ superiors arrived and ordered him released.

Activists were stopped again a mere 300 meters away, where passports/IDs were again checked and more soldiers were called. A number of illegal settlers arrived to offer soldiers tea and treats and shout insults at ISM and Palestinian activists.  One settler returned again and again to make threats, attempted to block or take cameras, and at one point persuaded soldiers to give him the activists’ passports. When all but one of the detainees (Izzat of Youth Against Settlements) had their identification returned, the rest remained in solidarity and as a group returned to the checkpoint to demand the last activist be released.  This yielded yet another round of ID inspections and a police visit before all were finally allowed to head home. 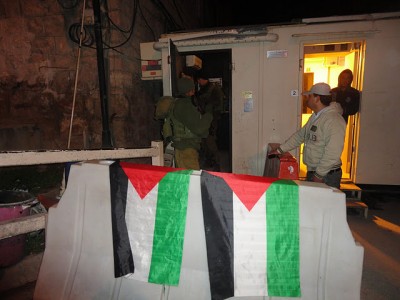 First detention at the checkpoint

In the last two weeks since the Golani Brigade were shifted to checkpoint duty in the Israeli-administered H2 quarter of Hebron, military aggression and human rights abuses have increased, according to ISM activists and Palestinian residents of the area. While checkpoint stops and attacks on Palestinians have been historically commonplace in the divided city, Sami of Youth Against Settlements says that when the Golani Brigade is assigned  the number of human rights abuses goes up many times over.  Additionally with the Golani deployment in Hebron, military harassment of international activists has also increased, as witnessed by the repeat detentions of Friday night.

According to the Israeli news source Haaretz.com, the Golani Brigade has a ‘complex’ and special reputation for at once being particularly ‘tough,’  and routinely sent to front line combat “as a brigade that struggles with no small number of disciplinary problems and scandals, caused by bad behavior ranging from revolts against commanders to abuse of Palestinians.”

According to ISM and Youth Against Settlements activists this ‘bad behavior’ has been more than evident with the last few weeks’ upsurge in arbitrary detentions and harrasment.

On the following morning, one of the ISM activists detained Friday night was stopped yet again, her passport taken, threatened with arrest, and surrounded at her apartment. Another ISM volunteer asked, “Why do you keep breaking international and Israeli law?”  The commander’s response, also present the night before, summed up his answer in four words: “I am the law.”