“I cannot even pick up another child in my arms, I had a new grandchild, he is six months old, but I have yet to take him in my arms, I feel that place belongs to Fares” 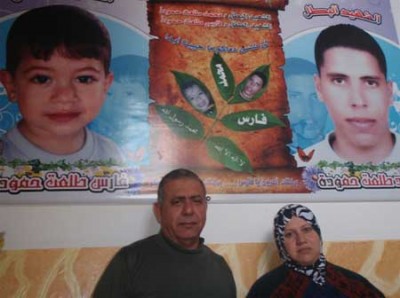 In the early morning of 11 January 2009, the home of Intissar Hamouda, 41, in Tal Al-Hawa. Gaza City, came under attack from Israeli forces. Israeli tank fire resulted in the death of her son, Fares Hamouda, who was two years old at the time of the attack, and her step son Muhammed who she cared for with her husband Talat, 54, Muhammed’s father. Fares died immediately in Intissar’s arms, while Muhammed bled to death as medical crews were unable to reach them.

“Muhammed and Fares had a lot in common. After I had Fares I could not breastfeed so we had to give him manufactured milk. Muhammed lost his mother at ten months and so was also fed manufactured baby milk. As a result, both had similar illnesses with similar symptoms,” says Intissar. Throughout their brief time together the brothers remained close. “Fares would refuse to go to sleep until Muhammed came home from school. On the day of the attack Fares was sick, but he refused to take medicine from me, he wanted it from Muhammed,” says Intissar.

Following the attack Intissar was severely debilitated. “I could not walk on my legs even six months after the incident due to injuries in my legs and pelvis; I needed help from my step daughters and sisters to move around the house.” Intissar has since undergone three surgeries to remove shrapnel from her abdomen as well as reconstructive plastic surgery.

Fares was not only close to his half brother Muhammed, but also to Intissar’s step daughter Kariman and step grandchild Rania, who were 13 and 2 respectively at the time of the incident. Both have been traumatised as a result. “Kariman became extremely aggressive in school and at the advice of teachers Talat decided to withdraw her from it,” says Imtissar. “Three months following the incident I came back to the house with Rania to get her toys and other things, but she begged me not to enter the house and wouldn’t take anything from it.” Similarly, Intissar said that “ten days ago we were in the Old City shopping and Rania saw a funeral of someone killed in a recent Israeli attack, it reminded Rania of Fares and Muhammed and she started to cry, when I explained they had gone to heaven, she replied, “just like Muhammed and Fares”.”

Intissar and Talat have both been emotionally affected by the loss of their sons. “I cannot even pick up another child in my arms, I had a new grandchild, he is six months old, but I have yet to take him in my arms, I feel that place belongs to Fares,” says Talat. The anniversary is particularly hard on Intissar, who still suffers chronic pain from nerve damage as a result of the attack. “As the day approaches they show interviews taken of me after the incident or start to talk about the attack,” says Intissar, “I can’t even watch stories of other women with similar experiences, so I don’t turn on the television.”

As regards the future the couple feel they have nothing left to be taken from them. “We lost the nearest things to us, we have nothing else left to lose,” says Intissar. “I am no longer even afraid of the bombings.” However Intissar clings to some hope that she can have another child following the death of Fares, who she tried to conceive for 21 years. “I have tried through artificial insemination already, but it didn’t work. I’m hoping to try again.” Similarly Talat has hopes that there will be political reconciliation among the Palestinian political factions. Regarding the prospects of their complaint in Israeli courts, Intissar is unimpressed; “the Israeli’s committed war crimes against us, they destroy the houses over the heads of civilians, I expect no justice from them.”

PCHR submitted a criminal complaint to the Israeli authorities on behalf of the Hamouda Family on 21 July 2009. To-date, no response has been received.