Kufr Qaddoum: Not peanuts in the colonists’ jar

The cold and rain did not keep the residents of Kufr Qaddoum from protesting this past Friday. Even the hail storm did not stop them from demanding their equal rights. The resilience and courage of the residents cannot be summed up in words. However, this is not the message they wanted to broadcast. Besides their everyday demands for justice, they wanted to express their concern for the “Judiazation of Jerusalem.” This term refers to the Israeli strategy of erasing all Palestinian and Arab identity in Jerusalem. Kufr Qaddoum residents expressed this concern by wearing traditional Arab clothing during the protest. They proudly walked around in this traditional clothing because they know the history of this land and their legitimate connection to it. Although this was a symbolic gesture for solidarity with the Palestinians from Jerusalem, culture theft is a wide spread concern for all Palestinians. 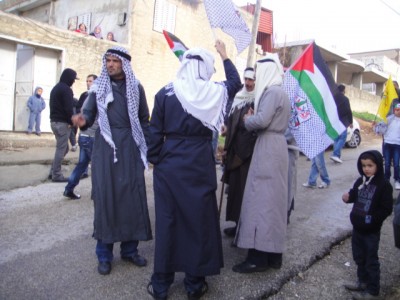 Insisting on the culture of Palestine - Click here for more images

The term the “Judiazation of Jerusalem” does not show the entire picture because Palestine as a whole is at risk of having its  history censored. Israel’s strategy to legitimize its self consists of de-legitimizing Palestine. This strategy has been in place sinse the creation of Israel, and the tactics do not appear to be slowing down.

The Israeli government uses many methods, but one of the most inhumane is home demolitions. The Israeli Committee Against House Demolitions (ICAHD) has documented that 2011’s house demolition numbers have doubled from previous years. In order to “make room” for more illegal settlements, Israel is continuing the displacement of hundreds of Palestinians every year. As reported by ICAHD, 622 Palestinian structures were demolished and 60% of the displaced people are children.

The landscape itself has fallen victim to bulldozers and landscaping. Debris from destroyed villages is cleared, and trees are planted to create forests in an attempt to show the land was never populated, while its refugees still hold keys to their leveled homeland.

While the landscape is under attack, the very names of villages throughout Palestine have been turned into Hebrew. Rabbi Kahane, an American Zionist and ultra nationalist, stated that there was no such thing as an Arab village with an Arab name. “It is all Jewish,” and according to him, rightly so.

This attempt to destruct Palestine has of course targeted the culture in addition to the geography. In what appears to be a comical topic, Israel forges its way into Levantine culture by thieving falafel and hummus through its public stunts and marketing at supermarkets. From translating popular Arabic songs to Hebrew, to borrowing the culture of Arab Jews to mask a mostly European colonial pursuit, Palestinians still trace their authentic history to the land while most Israelis will eventually admit where they are from, while mechanically uttering state fed propaganda:

The indigenous, regardless of religion, have more in common with the land and its history than Zionist immigrants can attest to.

If Israel’s “Judiazation” procedures continue to target the land, the homes, and the people who are forcibly “replaced” by “the chosen inheritors of the land,” then the indigenous Palestinian, Arab culture will be replaced with manufactured Israeli culture.

These are the reasons why Kufr Qaddoum residents and other Palestinians resist; for their existence. Yet, when American politicians state that Palestinians are “invented,” it goes to show just how essential it is for those in solidarity with Palestine to showcase what is actually occurring on the ground: that it is Israel itself  who has manufactured itself.

It is becoming more and more obvious as insecure, violent settlers showcase the nature of colonialism, with the self righteous, pompous attitude of gun holders. No Palestinian would deface the land just to prove a point. Historical truth does not change, regardless of the millions of maps and books Israel and America author. As Edward Said stated, “It is quite common to hear high officials in Washington and elsewhere speak of changing the map of the Middle East, as if ancient societies and myriad peoples can be shaken up like so many peanuts in a jar.”