Kufr ad-Dik: At the crossroads of Israeli confiscation

The village of Kufr ad-Dik in the Salfit region of the West Bank has become the latest in a series of villages to launch weekly protests against mass land theft by Israeli occupying forces. 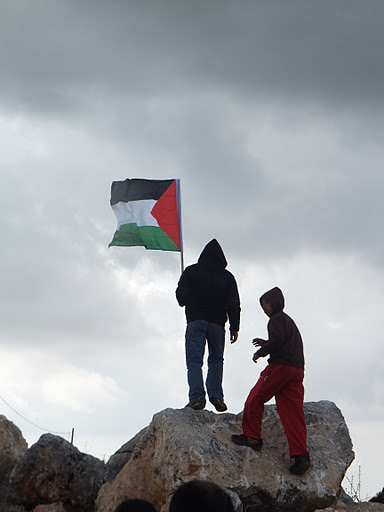 Residents of Kufr ad-Dik took part in their fifth demonstrationon Friday, 27th of January. While this demonstration was short due to weather conditions, the previous demonstration on the 20th of January was much longer. Israeli forces used large amounts of tear gas to repel the protesters before firing more gas directly into the village and using rubber bullets on some remaining demonstrators.

Eighty percent of the land of the village has been confiscated by  the Israeli military  in the name of security. The village is surrounded by four different settlements as well as a collection of recently built Israeli factories. Israel currently has plans to build a fifth settlement nearby atop a hill.

Eleven houses are currently under demolition orders, some of them for the past three years.  A total of twenty-one farm buildings have also been served with demolition orders. So far five of them have been demolished. Most recently, on 17th December, three wells and five rooms belonging to one farmer were destroyed.

The region of Salfit, in which Kufr ad-Dik is situated is extremely important to Israel both because of its possession of significant water resources. Its location comes at at a point where the border separating 1948 lands and Palestinian villages is quite thin. There are currently eighteen illegal Israeli settlements in the Salfit region, but only eleven Palestinian villages.

Neil is a volunteer with International Solidarity Movement (name has been changed.)