Gaza was treated to a strange new sight today, not really new, but something that has not been seen in Gaza in a long time: tear gas.  In Gaza protests are not smashed with tear gas and clubs like in the West Bank, they are met with live ammunition.  In a continuation of Israel’s policy to separate the West Bank from Gaza, nothing is overlooked.  The sub-human status they wish to cement in the world’s mind when it comes to the people of Gaza is adhered to brutally.  On May 15th 2011, when over a hundred demonstrators were shot near Erez, only one canister of tear gas was fired. Before that the protesters faced live ammunition and tank fire.  In the three years that regular demonstrations have been carried out near Erez by the Beit Hanoun Local Initiative, regulars tell me that this was the first time they had seen tear gas. 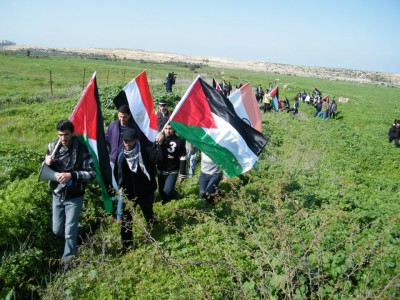 The demonstration started like all the others.  We gathered near the half destroyed Beit Hanoun Agricultural College and marched towards the no go zone.  There were about forty of us, men and women together.  As always, the demonstrators were armed only with a megaphone and our voices.  Today, we planned to hike from Erez to the east of Beit Hanoun, near the site where two young men were murdered last week while catching birds and collecting rubble near the no go zone.  The no go zone, which used to be an area of flourishing orchards has been reduced to yielding rubble to recycle into concrete.

Israel bans the import of concrete into Gaza.  Only humans would need concrete to rebuild the thousands of houses Israel destroyed in the 2008-2009 massacres they carried out in Gaza.  In Israeli eyes, Gazans aren’t really full people; they are half people to be murdered at will for even thinking of coming close to the no go zone.

This is why we march, we deny the no go zone, and we deny the occupation.  The refugees of Gaza, thrown from their homes during the Nakba, want to return to their homes.

We walked down the muddy road that leads to the no go zone.  As we got close to the no go zone, the shooting began.  Shooting is not unexpected; bullets are the language of the occupation, at least the language that you hear.  Ethnic cleansing, oppression, and torture are also languages the occupation speaks, but the loudest voices of the occupation are the bullets and the bombs.  The bullets passed over our heads; they slammed into the dirt in front of us.  Then, the unexpected happened; the tear gas began to fall.  The clouds of tear gas were smaller than I remember from protests in the West Bank. Perhaps the shells are old, they are used so seldom in Gaza that maybe the inventory is old.

This isn’t an issue in the West Bank, there the protests are coated in tear gas, men are killed or severely injured by tear gas canisters shot at them like Mustafa Tamimi and Bassem Abu Rahma who both passed away, or Tristan Anderson, who survived. Women are suffocated by it, woman like Jawaher Abu Rahma.  It is fired into houses, schools, fields, villages; tear gas is omnipresent.  In Gaza, tear gas is a blast from the past, here the occupation has discarded that language, in Gaza, it only speaks with bullets and bombs. 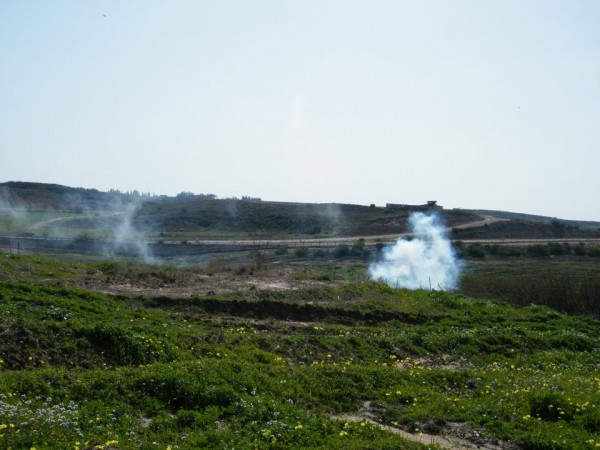 At first it wasn’t clear if the protest would continue. People were shocked by the use of the new weapon.  Quickly though, a decision was reached: We would continue.  We walked east along the edge of the buffer zone.  Soldiers in concrete towers hundreds of meters away fired live ammunition at unarmed protesters walking on their own land–soldiers in concrete towers built on the land these protesters were ethnically cleansed from.

The black flag that flies over the occupation did not come down after the massacre of Kfar Kassem, it is still there, it is just that it has been flying for so long that no one remembers anything else. the black flag is like the sun, people do not remember a day before it was in the sky.

Walking in the no go zone isn’t easy.  The ground is uneven from the constant destruction of the bulldozers which Israel uses to make sure that nothing takes root there.  The ground is littered with the past: irrigation pipes, metal rods and concrete rubble from the destroyed houses.  Slowly all of this is ground up under the blades of bulldozers and treads of tanks.  We walked east, the shooting stopped for a bit.  Two soldiers appeared on a hill to the north, they raised their guns.  They lost sight of us behind a hill.  We emerged from behind a hill: we saw a tank on another hill.  Jeeps sped along the border.  The shooting began again.  Bullets flew over our heads. 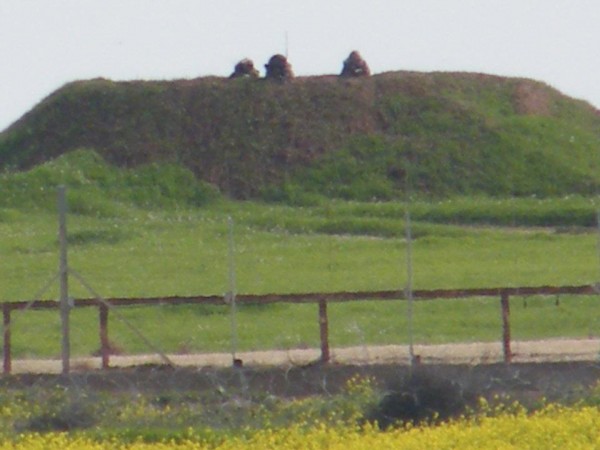 We reached the eastern edge of our prison and turned south.  Soldiers appeared again on a new hill.  Shooting resumed, tear gas canisters from 500 meters arced over our heads.  We stopped and reminded the soldiers that this was a nonviolent demonstration by people on their land.

They continued to shoot, then the soldiers on the hill began to yell at us with a megaphone, “Gazans are donkeys.”  Gazans are not donkeys, they are people, but perhaps if you repeat a lie often enough, people will start to believe, people like these soldiers.  We passed the carcass of a horse, rotting.  A donkey grazed to the east of the dead horse.  At least the donkey was still alive.