“The bodies of nine of those killed were not found, including the bodies of my wife and my children. I tried my best with the civil defense personnel to find their bodies. All we found were pieces of flesh that were unidentifiable.” 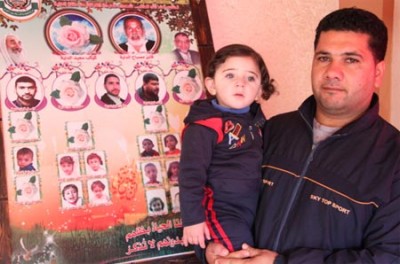 On 6 January 2009, at approximately 05:45, an Israeli aircraft bombed the al-Dayah family in the Zeitoun neighborhood of Gaza City. 22 people, including 12 children and a pregnant woman, were killed. Only one of the family members inside the house at the time of the attack, Amer al-Dayah (31), survived. Amer, two brothers who had not yet returned home from Morning Prayer at a nearby mosque, and two sisters who live elsewhere with their husbands and children are the only surviving members of the al-Dayah family.

Mohammed al-Dayah (31) recalls the day of the attack: “after I finished praying, I stood beside the mosque, talking to our neighbor, waiting for the sound of the airplanes and bombardments in the area to decrease. Then I heard a very powerful explosion. Shrapnel landed where I was standing. I immediately rushed home. When I reached it, I only found a pile of rubble. I began screaming and calling out for members of my family, but there was no reply. They were all under the rubble. Dead.”

Mohammed was not able to bury his wife Tezal (28), daughters Amani (6), Qamar (5), Arij (3) or his son Yousef (2). “The bodies of nine of those killed were not found, including the bodies of my wife and my children. I tried my best with the civil defense personnel to find their bodies. All we found were pieces of flesh that were unidentifiable,” he says. Tazal was 8 months pregnant with a boy when she was killed.

“At the moment I cannot imagine ever being happy again, or celebrating a happy occasion. It reminds me of the old life I used to have with my family. Before, I used to go to many parties. I always danced dabke, together with my extended family in Zeitoun. I led the dancing. Whenever we had a chance to celebrate, we would. Now I cannot bear the sound of party music, of celebrations. It makes me too sad. Whenever there is a party in the neighborhood, I have to leave the house and go somewhere else,” says Mohammed. The holidays are the most difficult time of the year for him: “during Ramadan and the Eid holidays I suffer and think of them even more than usual.”

His brother ‘Amer pushed Mohammed to remarry. “At first I didn’t want to but I was alone and I had to somehow rebuild a life,” says Mohammed.  Now Mohammed is remarried and has two daughters, Amani (4 months) and Qamar (1.5 years old), both named after his daughters who died in the attack. “I didn’t make a party when I remarried. Neither did my brothers for their weddings. We simply do not feel like celebrating anything.”

Mohammed works as an electrician with the Ministry of Health, but has had difficulties at his work since he lost his family. “I am not able to sleep at night. The night time is the most difficult part of the day for me as I cannot fall asleep. I have tried everything. Even medicine, but that only made me dizzy. So, at night I just stay up and keep myself busy; eating, taking a walk, sitting in the cemetery, going for a run. Only after sunrise I fall asleep for a few hours, exhausted. Then, how can I go to work in time? I can’t. My boss has given me 10 warnings so far but at the same time I know that he understands and has sympathy for my situation.”

The three brothers rebuilt a house on the same place as the old building. All three of them insisted to return to the same location. “It is where we grew up,” says Mohammed. “The Ministry of Works assisted us in constructing the base and first floor of the house, but the bomb left a seven meter deep hole under the building which affected the foundation and ground water. It took us 3 months to fix the water problem, before we could even start construction of a new building.” However, Mohammed still notices that there are problems with the foundation of the building. “Every time there is a bombing, I feel the house move. It wasn’t like that before. The house is not steady. The base was destroyed by the bomb.”

As Mohammed tries to rebuild a life and a future, he has no hopes that he will see those responsible for the death of his family being held accountable. “I expect nothing from Israeli Courts. They [Israel] prepare a plan and justification first and then carry out their attack. The war crimes are justified before being committed. Crimes could happen anytime again.”

PCHR submitted a criminal complaint to the Israeli authorities on behalf of the al-Dayah family on 18 May 2009. To-date, no response has been received.